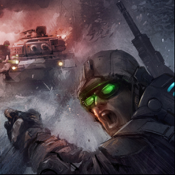 Defense Zone is a relatively newcomer to the tower defense games genre. This iPhone defense games app offers a typical gameplay where you build defensive towers on strategic locations around your main base.

In Defense Zone 2, the formula is practically intact but with added weaponry and more realistic backdrop. Developed by Artem Kotov, this game is compatible with iPhone, iPad, and iPod touch.

Is this a good defense games app for iPhone and iPad gamers? Keep reading our Defense Zone 2 HD app review to find out.

War Is Coming on Defense Zone 2

Tower defense is an iconic gaming genre loved by millions of mobile gamers. It is a game that combines strategic thinking and the wise deployment of defensive troops and towers. The genre is formulaic but it can still offer hours of exciting gameplay.

With Defense Zone 2, you get the typical tower defense game. But this time, gameplay is set in a realistic war zone with a palpable militaristic vibe. The game shines among other TDs by using commonly known weapons system such as flame throwers, missiles, tanks, rifle men, machine guns, rocket launchers, and carpet-bombing air force.

By avoiding cartoonish super weapons, the game forces you to balance your weaponry, resources, and deployments in order to defeat swarms of invading grunts and tanks. Gameplay requires real tactics as you try to hinder any offensive action with the use of the right weapon.

What this game lacks is a defined storyline. It takes you directly into the war zone and all you need to do is to put up a strong defense to defeat the invading army. But the lack of storyline does not diminish the excitement and hardcore action of the game.

As you advance through different levels, you will encounter increasing numbers of enemy swarms. The key to your success is brilliant tactical planning as you try to balance your resources in order to deploy more weapons and build effective fighting towers. 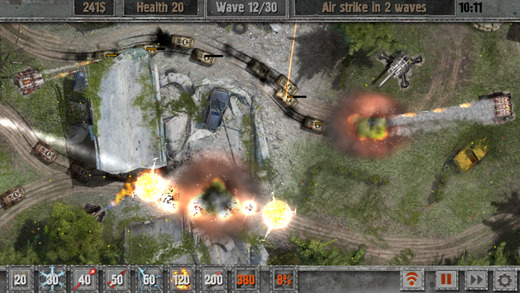 Defense Zone 2 offers highly realistic graphics with shadow effects, smoke, and blast impact. This is a well-designed game with no cartoonish characters or out-of-this-world monster swarms.

This game offers three difficulty modes: Easy, Medium, and Hard. There are 13 war scenarios in this version and each level offers a detailed mission map with realistic backdrop.

Defense Zone 2 uses familiar weapon systems in the real world. It allows you to equip your towers with rocket launchers, flame throwers, and missile systems. You can summon air power to drop bombs on selected enemy positions.

The game offers competent artificial intelligence. Swarms of enemy troops are smarter and they can overpower a tower with volume of fire, sustained siege, and other tactics.

And lastly, the game allows you to earn in-game credits so you can buy more weapon upgrades. 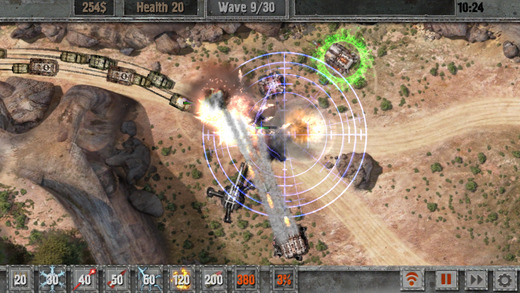 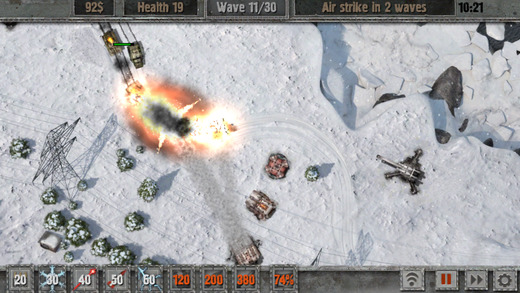 Defense Zone 2 offers an exciting and highly realistic tower defense game. It focuses more on tactics and offers typical weaponry used by conventional armies. This is a decent TD game that could offer hours of intense gaming action.