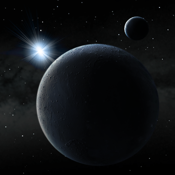 Our solar system holds many secrets and discovering as many of them as possible has been the goal of scientists since the first primitive telescopes were first pointed at the sky. It’s human nature to want to understand everything we can because we’re curious by nature. This sense of curiosity has led us to build spacecrafts to explore the other planets in our solar system, and we’ve been very successful at it.

The only planet (or gas ball, we haven't decided yet) we haven’t explored yet is the one that’s furthest from the Sun: Pluto. Although these days its status has been downgraded to a dwarf planet, it still has the ability to capture our imagination. In July of 2015 the New Horizons spacecraft will reach Pluto for the first time and with the Pluto Safari app you can track its progress every step of the way. This is a free app and it’s compatible with the iPhone, iPad, and iPod touch.

The App Store has quite a few apps that are dedicated to astronomy and exploration of the solar system. There are tons of apps devoted to sky watching, apps devoted to the study of individual planets, and there’s even a comprehensive app distributed by the folks at NASA so that you can keep track of all their ongoing missions. The reasons these apps are so prolific is because we have an insatiable desire to learn about our solar system. Pluto Safari is a natural extension of our curious nature, and it’s full of great information.

The great thing about this app is that it contains an extensive database of information. If there’s something you’ve always wanted to know about Pluto, chances are you’ll find it in this app. The user interface is pretty innovative as well. Each menu item is made to look like a satellite of Pluto, except that when you tap on one of these satellites you’ll be able to access a lot of interesting information about this frozen planet way out on the edge of our solar system. There aren’t any instructions for using this app, but you really don’t need any. The other great thing about this Pluto Safari is that it’s completely free of ads. This app will require 65.5 MB of available space on your iOS device. 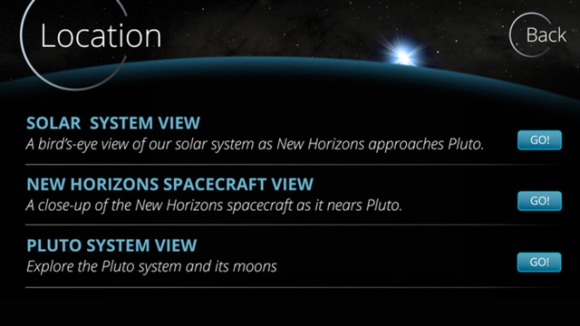 As mentioned above the main menu of Pluto Safari is designed to look like the planet and its satellites. To access an item you simply tap on it and you’ll see a list of option within that section. Again, to access any item in a section you simply tap on it. I really liked the interactive solar system maps in this app. You can move them around to change the angle and you can zoom in and out as well. To return back to the main menu you just tap on the home button found in the top right corner of any item. Another great feature of this app is the countdown clock in the bottom left screen of the home screen. This clock is constantly counting down to the arrival of the New Horizons' spacecraft at Pluto. 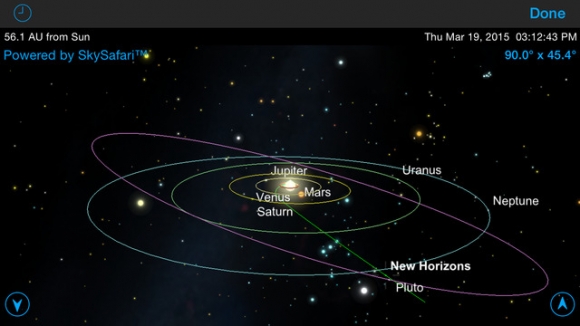 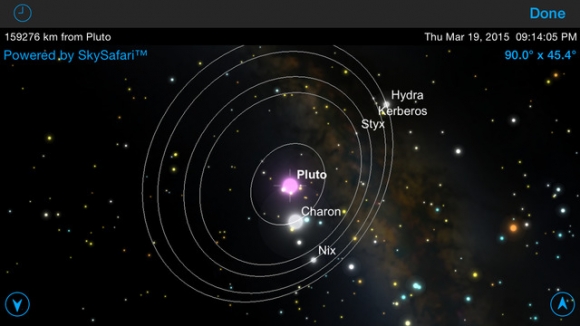 If you’ve got even a passing interest in the New Horizons' mission to Pluto then you’ll definitely want to download the Pluto Safari app. This app is full of information on the mission to the dwarf planet, as well as lots of historical information related to Pluto as well. This is a must-have for the amateur astronomer in all of us.