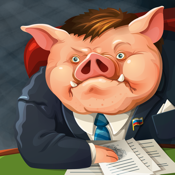 Corruption app review: use corrupt practices to dominate the world

Role-playing games can be a lot of fun, but it really depends upon the level of effort that the developers have put into creating their app. Some of these apps are quite sophisticated with a whole world created within the confines of an app, and others seem like somebody just hastily put something together in their garage. That’s not to say great things can't start from very humble beginnings as Apple itself is a fine example of, but this definitely isn’t always the case. Corruption is a role-playing game in which you rely on bribes and corruption to build your status and while it sounds like it might be a lot of fun, it unfortunately falls pretty flat. This is a free app and it’s compatible with the iPhone, iPad, and iPod touch.

The best role-playing games combine a great mix of controlled action and in-game simulation. If you think about classic games like Dungeons and Dragons there was always an element of chance to them but you still had a lot of actions that were in your control. If you didn’t make the right decisions to help strengthen your characters you’d soon find your game over. The same is true with the best App Store RPGs such as Final Fantasy, Shadow Fight, or Dark Legends and many more: they make you feel like you have a lot of control over the outcome. Corruption doesn’t do this at all.

This app starts on the wrong foot right off the bat. The initial introduction and in-game instructions are full of spelling mistakes and grammatical errors: it gives the app a very amateur appearance. It might be easy to get past this if the game play blew you away but it doesn’t, not by a long shot. The other thing that was frustrating about Corruption app was the strange introductory video,  which really didn’t add anything to the game and half the time I couldn’t even get it to play. Corruption app will require 14.7 MB of available space on your iOS device. 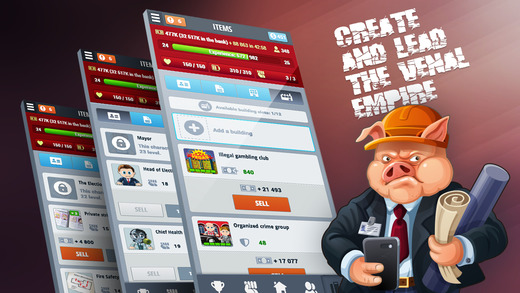 The idea behind this game is that you work your way through the world, trying to get ahead by dealing with corrupt officials and bureaucrats, and how do you deal with these types of individuals? Why, you bribe them, of course. Up to this point of the game I was actually looking forward to where the Corruption app might go, but unfortunately after that there wasn’t much to look forward to.

To progress through the game you have to complete a series of missions by simply pressing on the go button and that’s the only aspect of the game play you control. The results are entirely driven by the game-controlled simulation. The Corruption app suggest that you advance through increasing your energy levels, and having the right equipment, but since all you do is push the Go button it’s hard to see how you have any control over these things either. 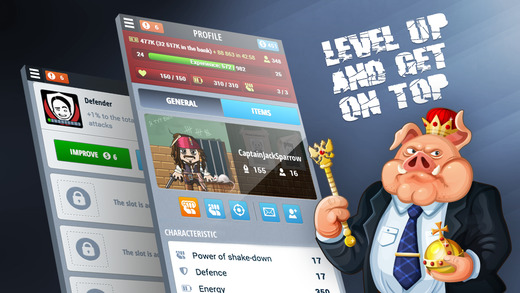 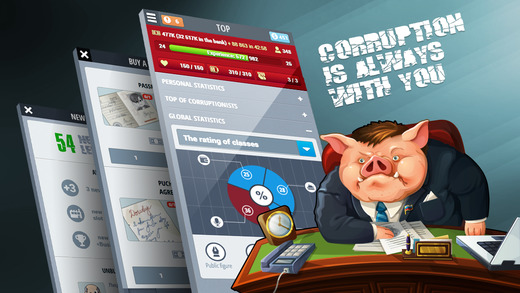 Great role-playing games can be a lot of fun: they’re interactive and full of challenges. Unfortunately Corruption is none of these things and it’s a huge disappointment. If you’re looking for a great RPG, keep looking.