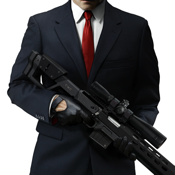 Hitman: Sniper by Square Enix Inc. is a realistic iPhone shooting games app based on the popular Hitman franchise. If you’re already confident in your shooting abilities, or you’re looking to improve with a little target practic,e this game may be just what you’re looking for.

With 150 different missions, this shooting games app will keep you occupied for hours even if you’re the type that doesn’t like to put a game down until it’s complete. If you’re not familiar with the Hitman franchise you’re an agent that’s licensed to kill in a similar vein to the James Bond franchise.

This one’s set in scenic Montenegro and the developers done a great job recreating one of the most scenic areas on the planet. This app is available for purchase from the App Store at a cost of $4.99 and it’s compatible with the iPhone, iPad, and iPod touch.

Is this one of the best shooting games apps for iPhone and iPad devices? Keep reading our Hitman: Sniper app review to find out.

First-person shooter games are one of the most popular platforms for iOS devices, but in most of these types of games you control a character that moves around as you shoot at your targets.

In Hitman: Sniper the only thing that moves is your rifles scope as you seek out your targets so it’s not a first-person shooter in the traditional sense but it’s still a lot of fun. There are management simulation games for every major global sport and the best ones all have a few things in common.

This game is pretty easy to get the hang of and each mission is explained to you as you go. The only real issue I had with this one is that each new mission takes a while to load which can be a little frustrating.

There are no ads to worry about, but there are some in-app purchases that you can use to gain access to better weapons. You can also share your progress with friends on Facebook so that they can share in the fun with you. This app will require at least 274 MB of free space on your iOS device. 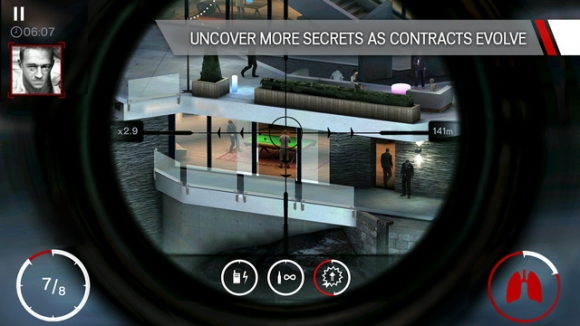 Each mission begins with an explanation of your mission objectives by a lady with a cool English accent. She’ll provide you with the targets name as well of a picture of them so you know who you’re looking for. She’ll also let you know how much each target is worth.

Your vantage point is from the mountains across from a sprawling villa where your target is hiding out. This is viewed through the scope of your rifle.

If you want to get a closer view of the target you can pinch to zoom in. Each target is surrounded by body guards and will try to hide if you don’t hit them on the first attempt.

To shoot at your target you simply aim the scope so the target is in the middle of the hash marks and tap on the little box on the screen to pull the trigger.

You can get bonus points for taking out a few of the bodyguards before you take out the main target, but doing this alerts the target to your intentions and puts them on the run.

There’s definitely a lot of strategy involved in this game and you don’t have a lot of time to make decisions so you’ll want to lose wisely. If your target manages to escape your mission will be deemed a failure. It’s a pretty intense game. 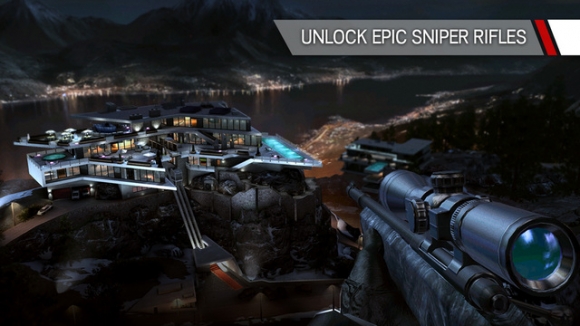 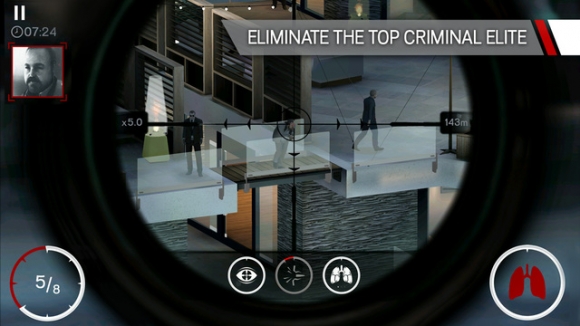 If you’ve always wanted to see how you’d do as a special agent licensed to kill Hitman: Sniper will let you test out your abilities. This game features over a 150 different missions and fantastic graphics which makes it highly entertaining. You’ll definitely enjoy this one if you’re a fan of the Hitman franchise.