ClipAisle by Hii – ClipAisle is like a social media app for concertgoers. If you’re passionate about music and you want to share your live musical experiences with others you can do that with ClipAisle and you can also catch a glimpse of the great concerts that others have attended as well. The great thing about the internet is that you’re not limited by your own physical possibilities and an app like this taps into the resources that are available to you. It’s all about expanding your horizons, and we can do that today more than any other generation ever dreamed possible. This is a free app and it’s compatible with the iPhone, iPad, and iPod Touch.

The Latest News When it Happens

An app like ClipAisle is about simplifying and focusing your online experience more than anything else. It doesn’t do anything that you can’t already do with other apps like Facebook or Twitter, but what it does do is bring together a community of like-minded individuals.  You can post your concert videos to your Facebook timeline and you can view the concert clips that your friends post as well, but you have to filter through a whole host of other stuff to get to the content you’re looking for. With ClipAisle you always know that the focus is on concert videos posted by people around the world.

There are no ads or in-app purchases to contend with in this app – it really is completely free which is the positive. Unfortunately, this app is still relatively new having been initially released in the Israeli market it hasn’t gained wider acceptance so you may have trouble finding content that you’re interested in at the moment. ClipAisle also lacks a clear set of instructions which is unfortunate. This app will require 28.3 MB of available space on your iOS device. 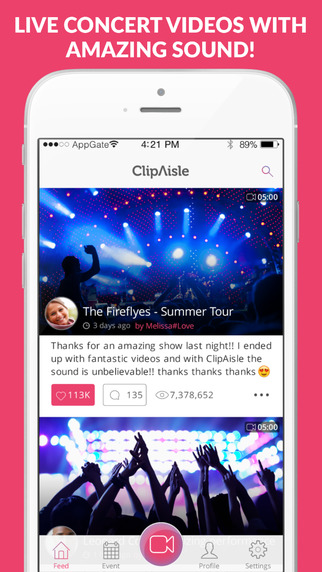 When you run the app for the first time you’ll need to create a profile, or you can use your existing Facebook account to sign up. You’ll need to do this before you can begin posting videos. Once you’re ready to go, it’s a pretty straightforward app to use. The main interface features a familiar looking content feed that you’ll find in a lot of social media apps – it’s just that this one’s for concert fans.

The best iPhone apps for concerts

Below the feed is your navigation menu which features five separate icons. The first is the home button which will always take you back to the feed screen. The second is called My Cloud which is where all the concert footage you’ve uploaded is stored. The third icon looks like a video camera and it’s where you go to begin recording your videos. The fourth icon is a listing of upcoming shows that you might be interested in. The final icon is a settings button where you can edit your profile, rate the app, invite your friends to join and get in contact with the developers.

Postings made to the feed also have like and comment buttons that others can use to express their feelings about the concert videos that you’ve posted. It’s all pretty smooth and the posted videos generally play pretty quickly without any hitches. There’s also an option to share the clip on other social media platforms, such as Facebook and Twitter. It’s very much a social media app just like any other. 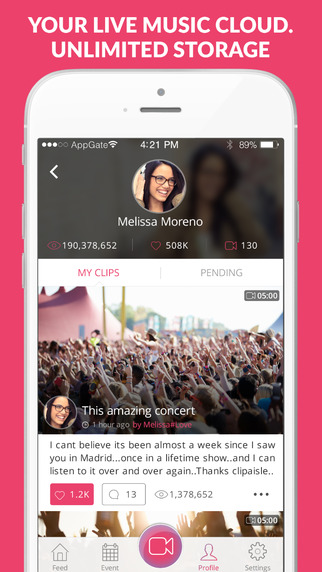 ClipAisle has the potential to be the primary social media app for concertgoers. Unfortunately it hasn’t been marketed globally just yet. It’s one to keep an eye on for the future though.