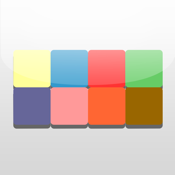 Colourbind! by Michael Guevarra is a simple game designed to test how well you do at recognizing different colors. It’s a simple concept, but it can be a challenge – especially if you’re color blind! With a little practise you may just be able to improve how well you recognize colors – at the very least you can have a little bit of fun trying. This is quite a unique little game, but it probably won’t keep you occupied too long if you have no difficulties recognizing different colors. Colourbind! is a free app and it’s compatible with the iPhone, iPad, and iPod Touch.

Colourbind! is a game that doesn’t really fit neatly into any category. It might be considered a matching game of sorts or a memory testing game, but it’s not exactly any of these things. Matching games normally require you to match two or more items – that’s not what’s really going on here. It’s also not really a memory game in the truest sense of the word as it doesn’t require you to remember anything – you simply have to have the ability to recognize colors which isn’t too difficult for most of us.

This app has some fundamental issues that are difficult to overlook. There are banner ads at the bottom of the apps main window and there are also full page ads after every game which is definitely annoying. The larger problem though is that the difficulty level of this game is virtually none existent. In a nutshell this game is too easy to be of interest to anyone for very long. Colourbind! app will require 16.8 MB of available space on your iOS device.

The game play is quite simple and easy to figure out. In each round you will be given a set of instructions that tell you which color to choose, but you have to read the instructions carefully because the app does try to trick you. For example, the word red may be displayed in a larger font and yet the instructions will actually ask you to select a different color – as long as you’re paying close attention it isn’t all that difficult to do. The color tile board features two rows of 4 and all you have to do is tap on the correct color to move on to the next round. After a couple of successful rounds the Colourbind! app does introduce a little twist by throwing a timer into the mix. This does make it a little more challenging, but it’s still not much of a challenge.

The app does record your highscore so that you can see what kind of progress you’re making – other than that there isn’t much to it. There are buttons for rating and sharing the app at the top of the screen. 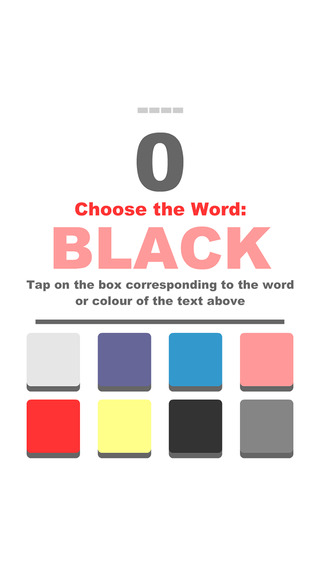 Colourbind! is a basic game designed to test your color recognition skills. Unfortunately the difficulty level of this game isn’t very high – it won’t keep you occupied very long. If you’re looking for a decent time waster then this could be a good option for you.