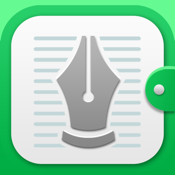 Every once in a blue moon an app comes along that takes a category to a different level. For an app to do this it has to provide something special, something that hasn't been done before, and BossNote is one such app. This is an app that tries to synergize every different way that you can store information all in one place. Whether it's typing notes in your notebook, recording appointments in your calendar, creating charts on a canvas, or taking photos that you can make notes on-this app does it all. The BossNote, which is featured on our list of the Best iPad apps for calendars, is a free app and it's compatible with the iPhone, iPad, and iPod touch.

Perhaps the king of all productivity apps over the past few years has been Evernote. This app, and apps like it, are built to help you organize your life. You can create notes, add documents, create lists, reminders, and the applications go on and on. So if you're going to make an attempt in this category you have to offer something that will help you stand out against great apps like Evernote. After all, we're all familiar with the saying if it isn't broke don't fix it, and there isn't a lot that Evernote gets wrong. So how does BossNote compare? It does a pretty good job. Perhaps what makes it stand out just a little bit is the option of using cloud storage-this feature helps to take the app to the next level.

As decent as BossNote is, it has some shortcomings. The biggest one is the fact that a lot of the features simply aren't free. On this level, it loses some ground against apps like Evernote which offers nothing but free features. The only features that are unlocked in the free version of BossNote are the calendar, the note taking feature, and access to your photos. There are still a lot of great things you can do with this, but it's hard to justify paying for this app when you can get a lot more features in an app like Evernote for free. It does have great graphics, but that's probably not enough to justify the expense. If you do decide that you want to purchase the extra features you're looking at about $1.19 per feature. The other major issue I had with this app is that it's confusing interface. It takes a while to get the hang of things .There is a bit of a walk through when you first run the app, but this isn't really enough to explain how things work for you. This app will require 39.8 MB of available space on your iOS device. 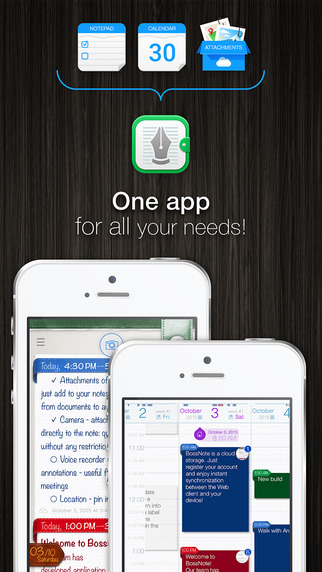 For one thing this app definitely works better on an iPad than it does the iPhone. It probably has something to do with the larger surface- it just doesn't seem to work on the smaller screen of the iPhone. Once you're finished the walk through, the app opens up into a basic calendar- to add a note you simply go to the time on the calendar you're looking for, tap and hold and a dialog box will open up for you to type your note. What really stood out for me were the excellent graphics- there really is some attention to detail in this area. The notepaper looks like old-fashioned graph paper that you would've used in school, and each note has a tab attached to the top of it which looks pretty cool.

You have several options to enhance your notes, although most of the features are disabled in the free version. There is a paint feature, a camera feature, a voice recording feature, and a location feature- on top of the standard note feature. In the free version only the standard note feature and the camera feature works. To write a note you simply start typing and, to add a picture, simply tap on the camera to take your picture, or add one from the existing library. Then all you have to do is tap on the back button in the top left corner and you'll see that your note has been saved on the calendar. 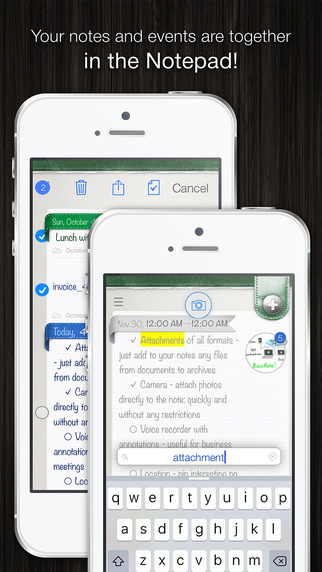 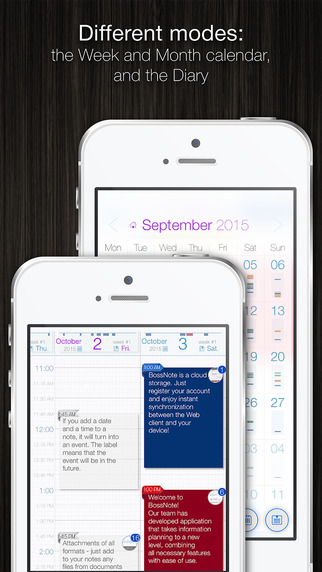 BossNote is one of the better productivity apps you'll find in the App Store. It's not quite in the class of Evernote, because a lot of its features require in app purchases, but it's better than most of the average apps you'll come across. With integrated notetaking and calendar features, along with the ability to add photos, drawings, and postmark your location, it's got some standout features. This one is definitely worth a closer look.