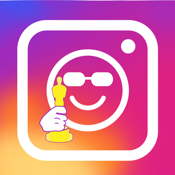 Emoji’s have become part of our everyday life – most of us use them in texts with friends and family just about every hour of the day. They’re a great way to add emotion and to have a little fun. These days there are tons of emoji’s to choose from with a button built right into your iOS device’s keyboard, but there are also lots of apps available that let you add even more emoji’s to your world. Emoji Stars is one such application – the cool thing about this one though, is that it lets you integrate celebrity emoji’s into your own photos. It’s also a pretty powerful photo editor that will let you customize your colors and at filters as well. It will make you look at your favorite celebrities in a whole different light. This is a free app and it’s compatible with the iPhone, iPad, and iPod touch.

There are countless apps within the App Store that cater to our love of emoji’s, but the idea of celebrity emoji’s is quite unique. The vast majority of these apps simply add basic emoji keyboards to your iOS device. Emoji Stars is completely different – as we suggested above this app is actually designed to let you integrate celebrity emoji’s into your photos – it’s quite a unique concept. After using it for a little while the app can become quite addictive.

Unfortunately this is one of those apps that are completely full of ads. As soon as you attempt to open a photo so that you can edit it and add emoji’s the first thing you’ll have to contend with is full-page ads – yes you can close them easily, but it’s definitely a little annoying. In fact, the first couple of times I attempted to add emoji’s to my photos ads kept popping up again – eventually I was able to carry on with what I was doing. You can remove these ads with an in-app purchase. It also features the obligatory pop-up asking you to rate the app which I’ve always felt was little intrusive. It’s best to let the user choose to rate the app themselves by including a simple out-of-the-way button that they can access when they’re ready. This app will require 27.2 MB of available space on your iOS device. 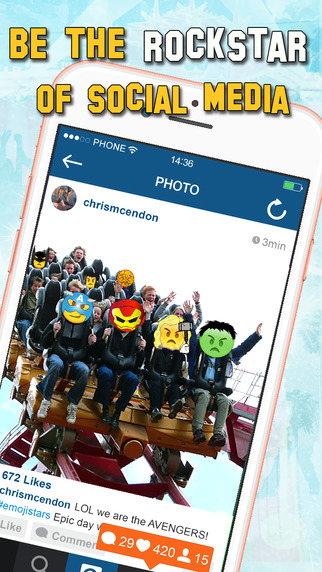 I really liked the opening screen of this app – it features a constantly scrolling photo collage of available emoji’s. It gives you a quick idea of what you can expect to find within the app. To get started you simply tap on the big start button in the middle of the screen. The app then gives you two options: you can either edit an existing photo from your library, or take a brand-new photo which you can edit within the app. This will then open your photo within the built-in photo editor. At the bottom of the screen you’ll see a menu with all of the available emoji categories – it also features tools to create effects, filters, text, and drawings on your photos. There are some locked categories that are only available through in-app purchase.

The best iPad apps for texting

When you’re ready to start editing your photos you simply tap on any one of the categories or tools in the menu bar. You’ll then see a new menu bar with all of the available emoji’s within that category. To add any one of them to your photo simply tap on the emoji and it will appear overlapped over your photo, you can then shrink the emoji to the size you want, or expand it if you prefer and move it anywhere you would like it to be on the screen. The whole process is very simple and easy to use – what’s more it really works. The same principle applies if you want to use one of the tools on the menu bar – you simply tap on the tool, create your addition, and tap on the checkmark in the corner to save your changes. You can produce some fantastic creations with this app. You’re only limited by your imagination. 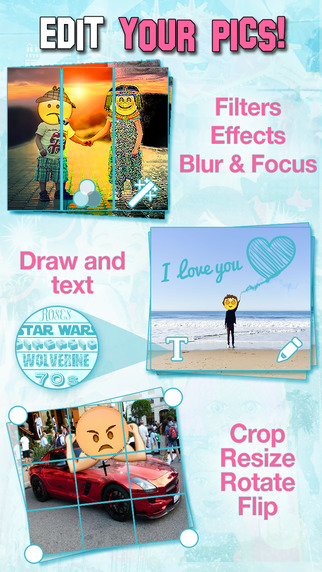 Emoji Stars is a fantastic and fun little app that lets you add all kinds of different celebrity emoji’s to your existing or newly created photos. It’s also a great little photo editor that will allow you to change the colors of your photos, add different filters to your photos, include your own drawings on your photos, and add text to your photos as well. For a free app it’s actually quite powerful, which makes it worthwhile dealing with the ads and in-app purchases.