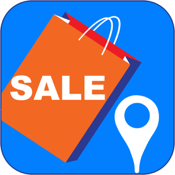 If there’s one thing that most people have in common, it’s their wish to find the perfect deal. We all want to save a few bucks and we’re willing to explore different options to do so. One such option is to take a look at the App Store and see what kind of coupon and money-saving apps are available. We’re all familiar with apps like Groupon, but there are also a lot of other unique apps which you may not have heard of.

The best iPad apps for shopaholic

One innovative, little app that’s trying to make a name for itself as a great way to find the best deals is the SalePointer app. This is a potentially user-friendly app, but it’s limited in its geographic scale to users in North America. This is a free app and it’s compatible with the iPhone, iPad, and iPod touch. 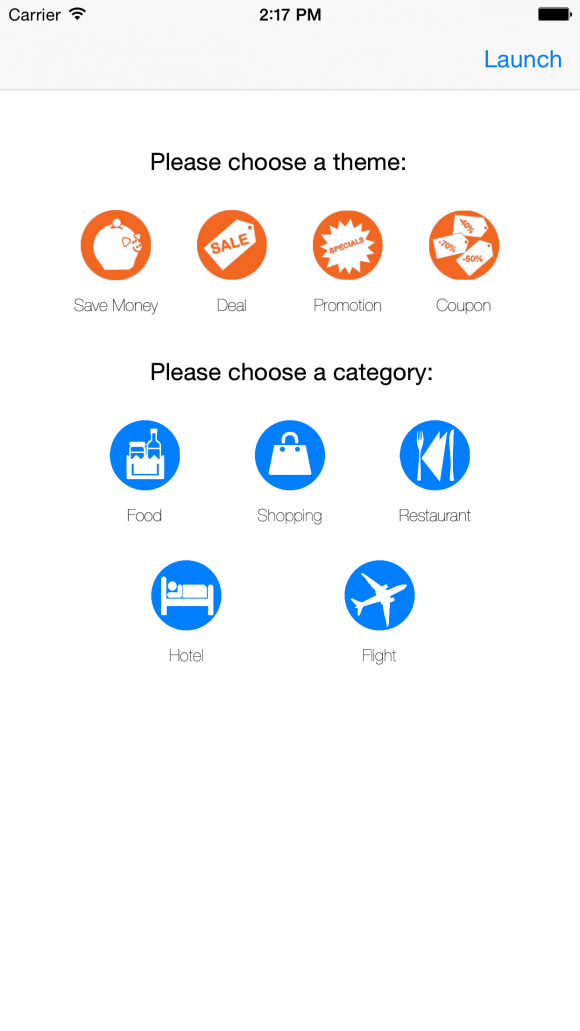 Where the Sales Began

SalePointer was created by a small company called BrainVision from Richmond Hill, Ontario, Canada. It’s a potentially useful little app and it’s actually the type of app that’s begging for a larger company to partner with it so that it can offer its innovative experience worldwide. Shopping apps may be nothing new, but what makes this app unique is its intention to find the best deals in physical stores in your local area – that’s something that Groupon doesn’t offer.

The best iPhone apps for jewelry

This app took a while to develop, but the final result is an app with a lot of potential. Its development was spearheaded by BrainVision founder and inspirational leader Albert Lam. He is a colorful fellow that graduated from the University of Toronto back in the mid-80s. Since his graduation, he’s dabbled in many different fields in both the public and private fields. Those experiences have provided him with the knowledge he needed to create the SalePointer app.

He got the idea for developing this app after working for such family-based organizations as the YMCA where he was exposed to a family-based experience which created a desire within him to provide those same families with the best shopping experience possible. Albert recognized that the families that relied on the YMCA and other such organizations had a need for this type of app.

As we’ve already indicated above, there are a lot of great shopping apps in the App Store already such as Groupon, but where SalePointer tries to differentiate itself from other apps is in its ability to find localized deals that are more relevant to the user. This is a very useful little app that intertwines your online shopping experience with your off-line shopping experience and I love the idea of marrying your online and offline world.

The best gifts apps for the iPhone

I’m always one to give an app every chance I can and that’s why I was pleased to discover that the developers have worked out some initial bugs that caused the app to continuously crash on me. It has a simple and intuitive theme that prompts you to select the type of shopping experience you’re looking for and then it provides you with appropriate sales that might interest you. I’m pretty satisfied with the overall layout and the quick and detailed access to sales it now offers. This app will require 5.4 MB of available space on your iOS device. 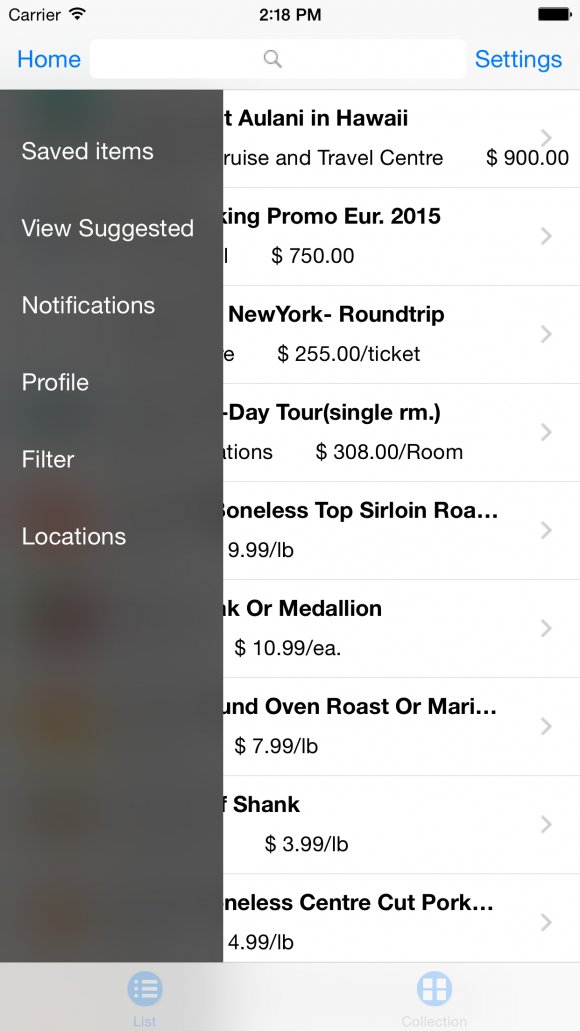 When you first launch the app, you’re prompted to choose the type of shopping experience you’re looking to use the app for such as: save money, deal, promotion, or coupon. Once you’ve made that selection you then have to choose from five different categories including: food, shopping, restaurant, hotel, and flight. All in all, there is something here for everyone and I think most users will find it very useful overall.

The items are presented in either a list view or a collections view depending upon your preference. When you tap on an item that is interesting, you’ll see a nice image along with a description of the item as well as its price point. You can then tap on the get direction icon at the bottom of the ad to see where the closest location of the store with the deal is happening is to you on a map. The only problem I had was that the default location seems to be homing in on the nearest big city to me and that’s a bit too far for me to travel. Fortunately, for most of the deals that were available, I’m well aware of the locations of those stores in my area, but it’s something I’d like to see fixed in future versions. 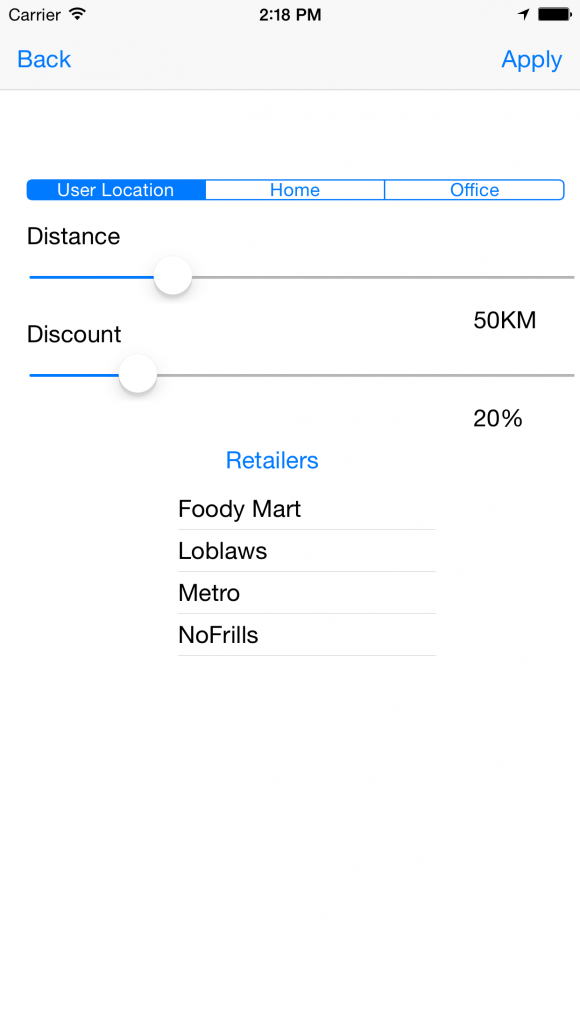 Set your location and search radius 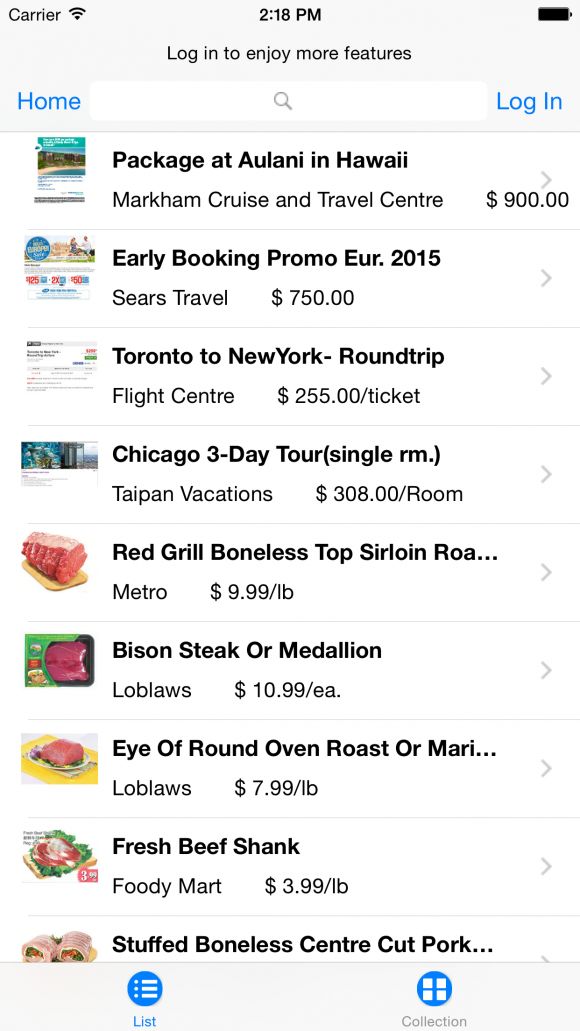 All Signs Point to this App

The first few times I tried to use this app I didn’t have much luck as it continuously crashed on me on both my iPhone and iPad. Fortunately, the developers seem to have worked out the kinks and the app is now working fine apart from the minor issue of the get direction function pointing to the major city near me rather than the city I actually live in. With all of that being said, I still highly recommend using this app. It finds local deals in stores that are mostly near your current location, home or office. I love a good deal, and I love an app that helps me find good deals.