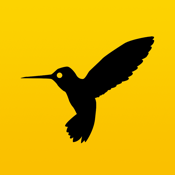 Hemingboard app review: A keyboard app for the budding wordsmith in all of us

As someone that earns a living by manipulating the use of words to create something that speaks to an audience, I’m quite familiar with how difficult it can be to get your point across sometimes. Even the best writers sometimes find themselves at a loss for words and that can be a frustrating experience. When this happens, I often find I have to walk away from the keyboard for a while and take my mind away from the writing completely, but the problem with that is that it simply isn’t conducive to productivity. That’s why I was quite pleased to find out that there is a keyboard app that can help you get past that writing block issue altogether.

The best writing apps for iPhone and iPad

Hemingboard is the app I’m talking about here and it really is a revelation. When you’re struggling at the keyboard to come up with the right words to say, this app is there to save the day. It’s a simple little app, but it’s highly effective and great for both amateur and professional writers alike. This isn’t a free app though, as it will cost you $2.99, but that’s not an unreasonable price for a useful little app like this. It works with all iOS devices including the iPhone, iPad, and iPod Touch.

An overview of the hemingboard app

A lot of apps have introductions or help sections, but I have no problem saying that this app has one of the best introductory walk-through’s of any app I’ve ever downloaded. It actually provides animated examples that show you the app in action, which makes it a lot easier to understand how things work. It’s one thing to explain how something works, but it’s always better to show you how something works and that’s the approach that the developer of this app has taken.

The best iPhone apps for blogging

I’ve used some keyboard apps in the past that were for lack of a better word downright confusing. Although their literature usually suggests that they integrate with your keyboard, so that they’re easily accessible, many of these apps are anything but accessible. Hemingboard really is a keyboard app that seamlessly integrates with your existing keyboard. 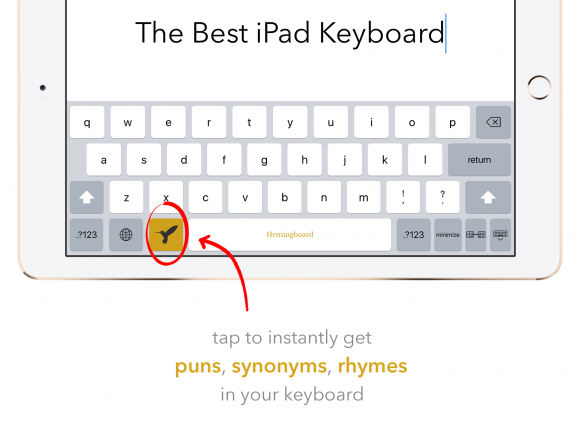 A Thesaurus with Rhymes and Puns

I can only speak for myself, but there are many times that I know what I want to say – I’m simply not happy with how I’m trying to say it. The Hemingboard provides you with a built in thesaurus at your fingertips with some great suggestions to replace those boring words you’re not satisfied with.

This isn’t just an app for people writing articles, blogs, or novels – it’s also great for songwriters as well. The problem with trying to write a song though is that it’s sometimes difficult to come up with the right words that rhyme, but with Hemingboard you can quickly find the right rhyming words by tapping on the Hemingboard key for suggestions.

According to the app’s creator Johnny Lin from San Francisco, California, he originally designed this app because he was experiencing the same types of frustrations that we all go through when trying to find the right words. He wanted to improve his own writing and communication skills so he set about creating an app as his own personal assistant – he never really thought about it as an app that the rest of the world would enjoy as well. Lin simply created this app for his own personal use, shared it in the App Store as an afterthought, and was surprised when it took off in popularity. It turns out, there’s a lot of people out there looking for the right words.

What really sets this app apart from other keyboard apps is not only the built in thesaurus, and the ability to help you rhyme, but it will also suggest some great puns that you can use to enhance your writing as well. This is a great little tool, which I think puts this one over the top and I can see myself getting a lot of use out of it. As the developer suggests you can use this to enhance your writing for a blog, to make your songs better, and even to impress a potential date that you’ve met online. 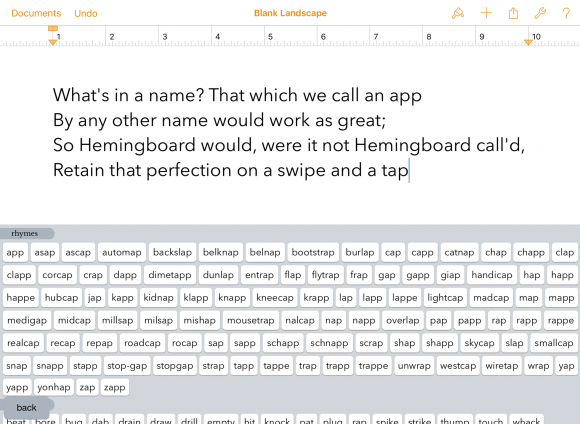 For a keyboard app to be useful though, it has to be able to integrate into just about any type of app where you can use a keyboard and this app doesn’t fail in that regard either. It’s compatible with pretty much any app you can think of including mail apps, Apple’s Pages app, the Microsoft Word app, Apple’s Notes app, your text messaging app, and Facebook messenger to name a few. Suffice it to say, it will work pretty much anywhere you need it to. 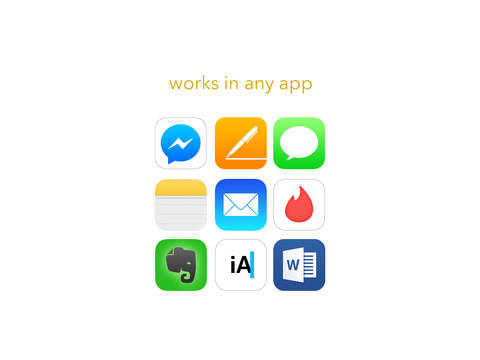 Works with many other popular apps

Probably the only thing I didn’t like about this app, other than the fact you have to pay for it of course, was that they bombard you with a request to rate the app the very first time you use it. As soon as I tapped on the Hemingboard icon to get a suggestion on a word, I was immediately asked to rate my experience with the app. I’ve never understood this type of request as it’s hard to provide a real opinion until you’ve had a chance to use the app. If they insist on including this type of request they should at least set it to pop up after you’ve used the app a few different times. 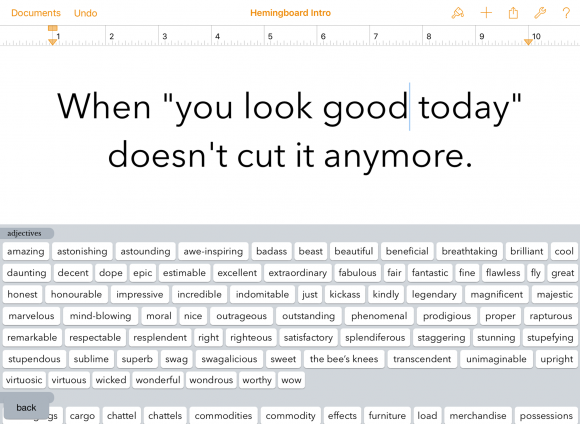 Find synonyms for words to spice up your content

A Keyboard for Any Level of Writer

There are a lot of keyboard apps out there, but most of them are little more than gimmicks. Hemingboard is actually quite a practical keyboard, which all types of writers will find useful. The thesaurus function is great, but what I really enjoyed about this app was that it can help you rhyme and even suggest some great puns to enhance your writing. It’s probably well worth the $2.99 it will cost you.