For those of us that were fans of the addictive, constantly changing world of Minecraft there have been a lot of spinoffs over the years with varying degrees of success.

The best iPad apps for Minecraft

The reason Minecraft appealed to so many people was because of its ever-changing nature and the ability of the individual to tailor the game to their own specific desires – you were in control. Sure, it was all about breaking blocks and moving blocks, but how you went about that was entirely up to you.

It was the type of game that was unique and different and that’s what made it successful. The graphics didn’t blow you away, but the ability to express your individualism was ever present.

A game that’s taken the Minecraft app world by storm over the last couple of years with over 5 million downloads was built around the success of Minecraft. The game I’m referring to here is PickCrafter and, while it’s certainly inspired by Minecraft, it’s an entirely different animal altogether.

This iPhone Minecraft game has all the fast paced action that we’ve become accustomed to over the years in arcade style games and it’s without a doubt a lot of fun. The game is free to play, although you can give yourself an edge through in-app purchases, and it’s compatible with the iPhone, iPad, and iPod touch.

Keep reading our PickCrafter app review to see if this is one of the best Minecraft apps for iPhone and iPad gamers. 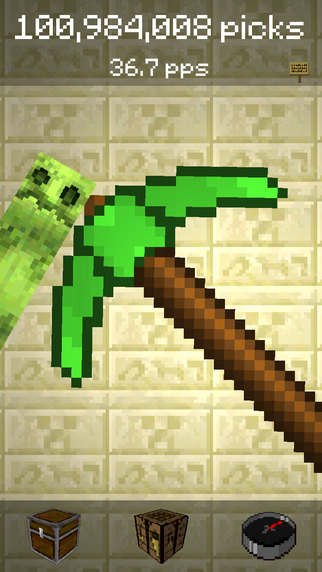 PickCrafter may be one of the simplest games you’ll ever play, but the developer has still taken the time to provide some simple instructions before you get started. The first thing you see when you open up this app is a basic instruction screen with a graphic display of how to play the game.

It’s always positive when developers include this kind of game play instruction no matter how simple a game is to play – it should never be taken for granted that the user will understand how things work right off the bat.

Tap or Swing Away

The basic principle of this game is pretty simple. All you have to do is tap away on the screen to break blocks or you can actually swing your device to accomplish the same task. That’s really all there is to it, but as simple as it seems, it can be highly addictive.

The problem with a lot of games these days is that they’re far too complicated and people quickly lose interest because they just can’t figure out the goal of the game. That’s not a problem with PickCrafter as the developer of this game, fiveamp LLC, has kept things as simple as possible.

By default, the game play takes place in a biome and it has a plain background with some trees and a wooded area. As you progress through the game, you can unlock different biomes including a desert biome, a snowy biome, a cave biome, and something called the nether.

Keep in mind, the graphics are very pixilated and have a sort of 1980s look to them so unlocking different biomes won’t result in vast changes to how you play the game, but they can provide a little variety.

According to the game’s creators they wanted to create something that would appeal to lovers of the classic game Minecraft and I think that’s something they’ve managed to achieve.

As you tap away on the blocks, your axe will eventually wear out and that can slow you down your game. That’s why it pays to tap fast as the more blocks you break the more options you have going forward.

Eventually, after you’ve broken enough blocks you’ll be able to buy more gear such as a chest plate, a helmet, leggings, boots, a shovel, swords, and even a new axe.

Upgrading your gear can help your game last longer, although it won’t change the actual game play very much – as you’ve probably already gathered, the gameplay never really changes, you just tap away. 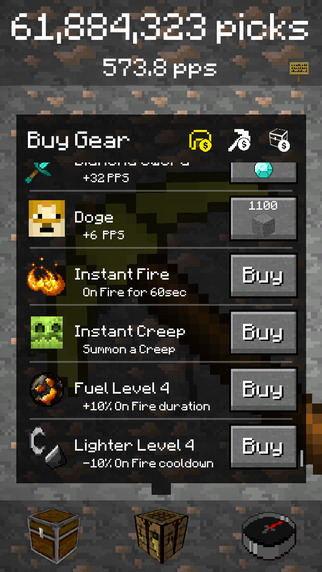 Just because the gameplay never really changes, doesn’t mean you don’t have a lot that you can achieve and accomplish in this game.

There are over 50 different achievements for you to get through and as you progress through the game you’ll notice little pop-up screens that let you know when you’ve accomplished a new achievement. It’s a nice little feature that adds some variety and lets you know how well you’re progressing.

The biggest knock on this app is the fact that there really isn’t a lot of variety in the game. It’s the type of game you’re going to either love or hate.

If you’re the type of person who likes the simplest games that feature only one simple task you will absolutely love this game as it’s certainly fast paced and will challenge you to go faster and faster, but for people that don’t care for gameplay that never changes this one won’t have much appeal. If you find yourself in this latter category it’s probably best to look for something else. 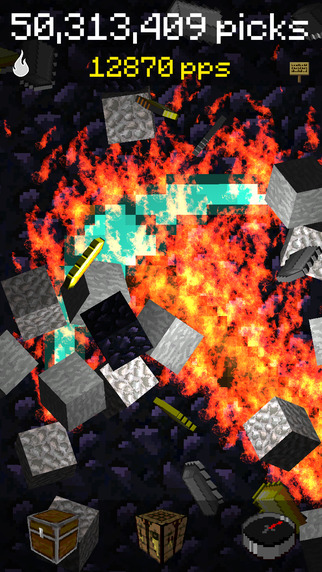 PickCrafter is a fun arcade-style game that’s a throwback to a bygone era. It keeps the gameplay simplistic, but it can be very fast paced depending on how you approach the game.

It’s not for everyone, but if you’ve had enough of complicated games that take hours to learn then you’ll probably be pleasantly surprised with the simplicity of this game. Download it today and have some retro-style fun.