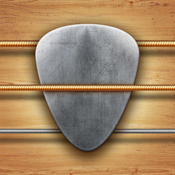 As someone who real loves to play guitar in my spare time, whatever that is, I always have a healthy scepticism when it comes to apps that claim to be the best guitar playing app in the App Store. It’s hard not to be a little wary with such claims as there are a ton of guitar apps out there that help you to learn how to play basic chords, learn solo guitar, or just have a little fun with a guitar simulator game. Almost all of them claim to be your best option and unfortunately in most cases that’s not even close to true. Every once in a while I am pleasantly surprised by one of these apps and that was the case when I had the opportunity to give Real Guitar Free by Gismart a try.

This app is packed full of features and really does have a lot going for it. The developers' stated goal was to create an app that appealed to newbie guitar players, experienced guitarists, and even anyone with just a passing interest in the guitar. For the most part, they’ve succeeded in creating an app with a wide appeal. Real Guitar Free is available in both iOS formats as well as Android. It’s compatible with the iPhone, the iPad, and the iPod Touch. 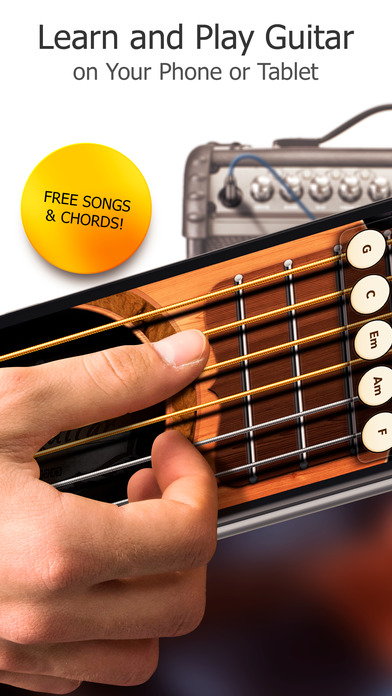 Before I go into all of the features that I love about this app, I think it’s important to talk about one area that could use a little improvement and that’s the navigation structure. Once you do get a hang of things it’s fairly straightforward, but it does take a bit of experimentation the first couple of times you use it. There is a bit of an intro and some tips as you go – it’s just that it could be a bit better especially for beginners. This is an app that would really benefit from a decent help section. I do like the color coded sections which make it easy to differentiate the different features of the app once you find them.

You can find it by going to chord mode and tapping on Play button. Once you do that, there will be a selection of songs to choose from, some of them locked and available once you watch a video ad. It has to be described as a fan mode, for everyone regardless of having any musical skills.

You can find it by going to solo mode and tapping on Play button. Once you do that, there will be a selection of songs to choose from, some of them locked and available once you watch a video ad. The mode lets you watch how to play the song and then you can repeat it yourself providing hints. Users can transfer this experience to playing it on a real guitar.

There are some different modes available to use within the app, but the chord mode is arguably the most helpful. When you’re in chord mode, you’ll notice 4 different chords you can sample on the side of the guitar simulator. You simply tap on a chord at the side of the screen and strum the strings to hear what that particular chord sounds like. 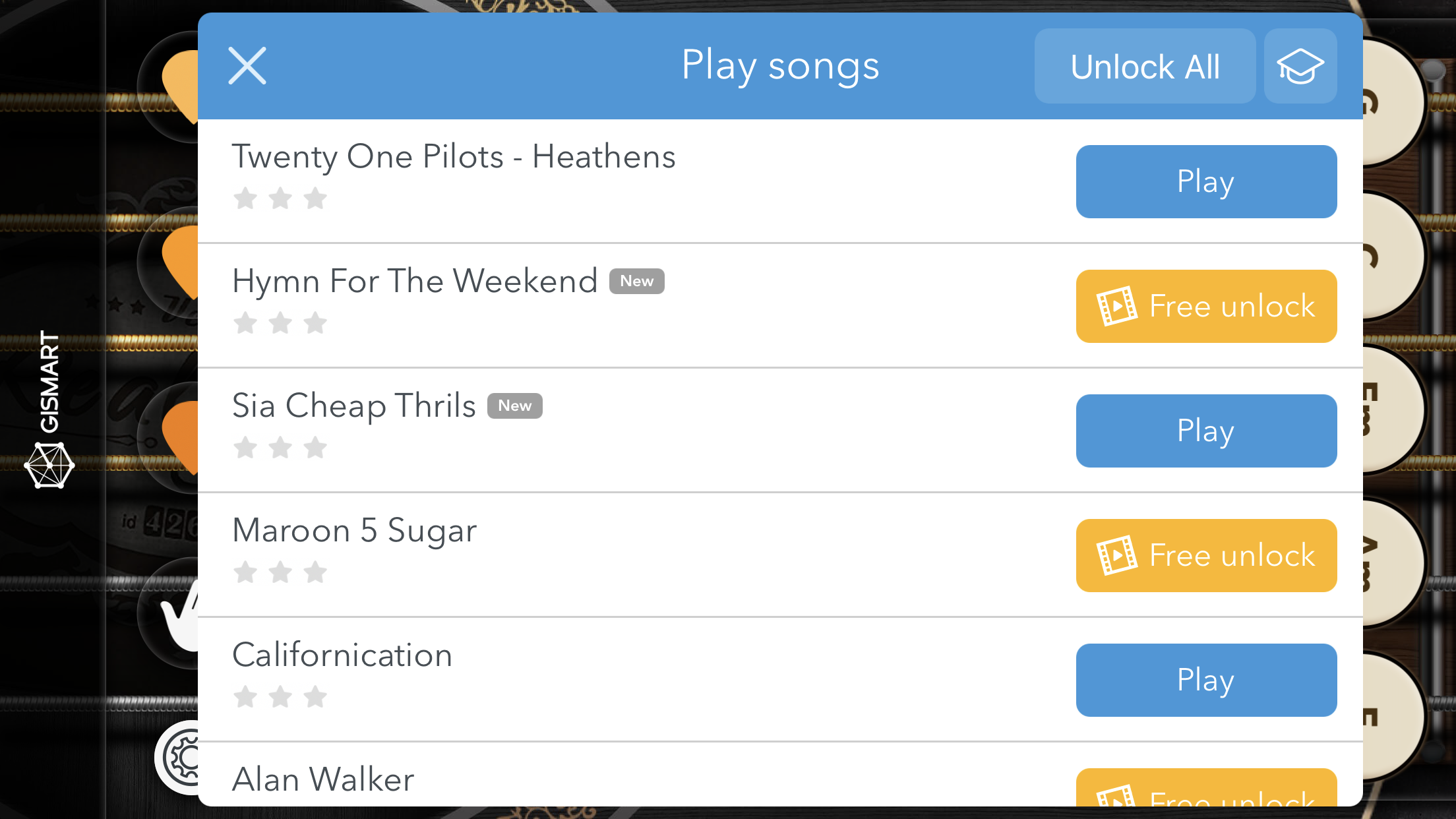 The best part is each chord sounds exactly as it would if you were playing a real guitar as the developer has recorded all sounds using an actual live guitar. If you tap on play the app will give you several songs you can choose from to see them played in simulation and each chord that’s being played is highlighted as the song progresses. It’s a nice extra touch that can be very helpful to the beginner as they seek to expand their chord library. 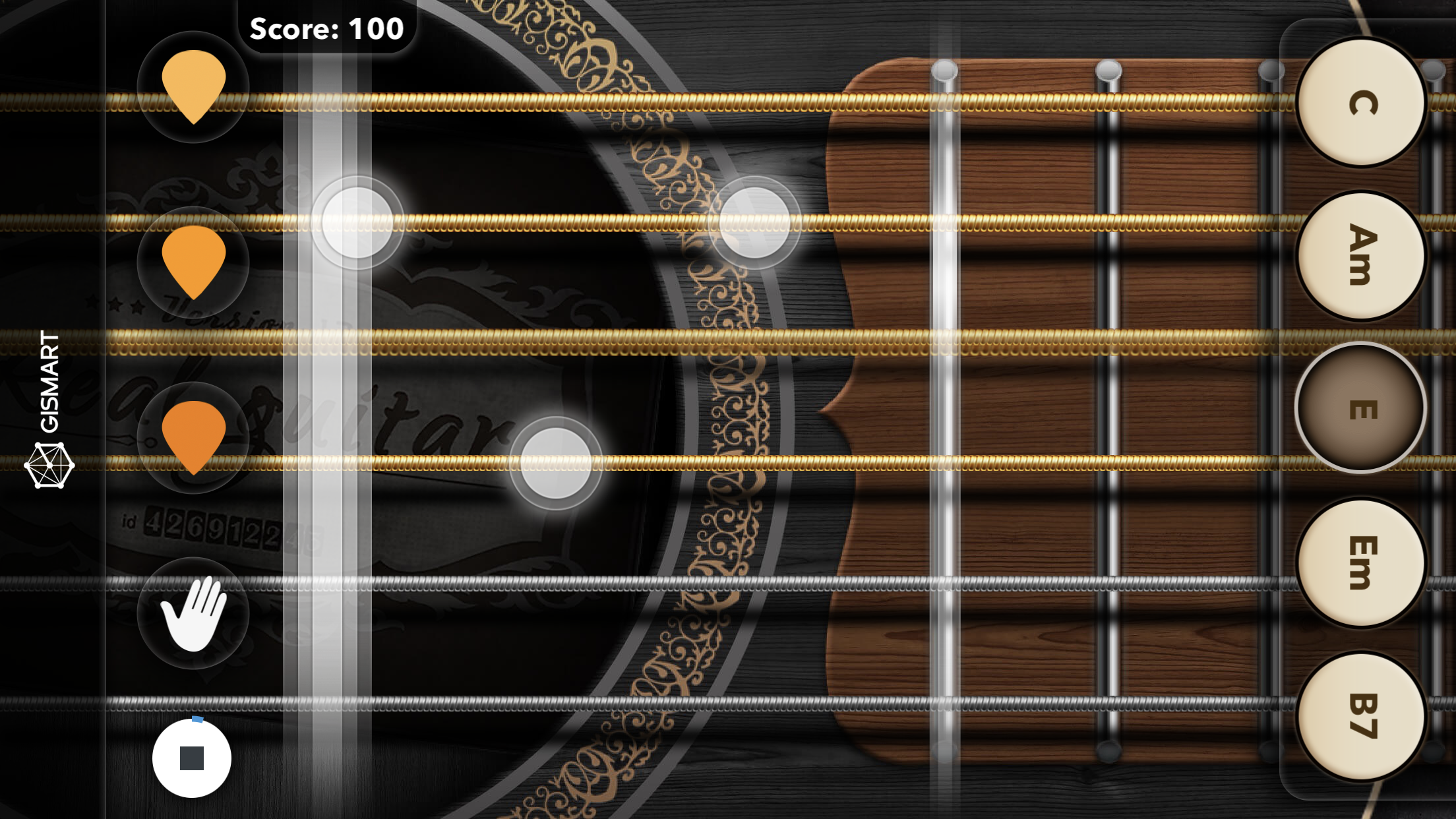 Chords are great and anyone that’s serious about learning how to play the guitar has to learn them, but it’s also great to be able to try your hand at a solo and they have a solo mode that allows you to do this. The effects are quite realistic as you can bend the strings and perform hammer ons just like your favorite guitar players do. It’s a whole lot of fun and definitely worth downloading the app for this feature alone. 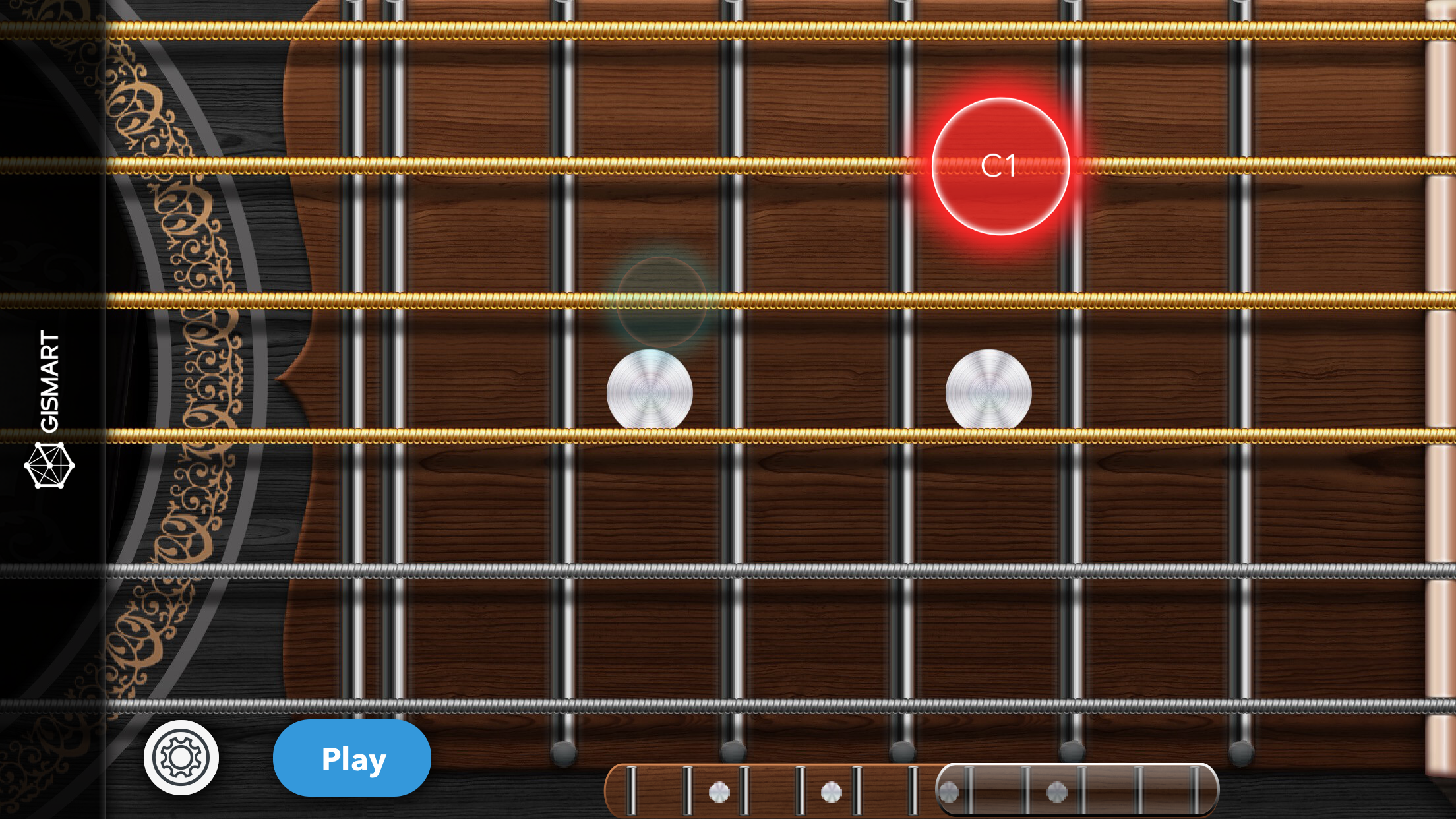 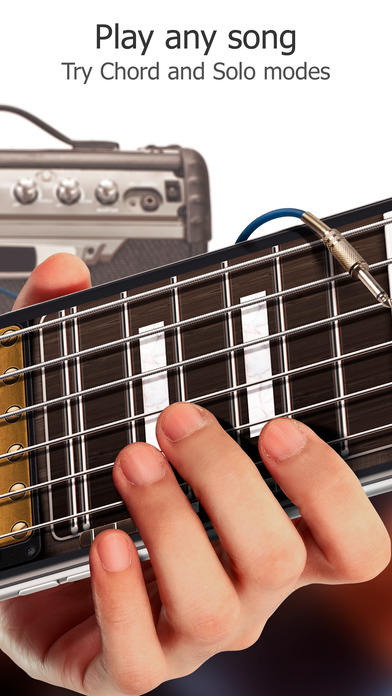 In the free version of the app, you really only have two choices for your instrument and both of them are acoustic guitars. There is a classic guitar that has a full dreadnaught body and a full rich sound and a more modern acoustic guitar with a slightly lighter sound. The best thing to do is to try them both and see which one you prefer, but I really recommend the classic guitar as it’s quite a pleasure to the ears. It would have been nice to see a couple of more choices in the free version, but you can still get a lot of mileage out of the ones that are accessible.

My favorite part of this app has got to be the chord library and it’s without a doubt one of the best I’ve ever seen in a guitar app. If you can’t find the chord you’re looking for in this chord library it probably doesn’t exist. Best of all each chord comes with a picture diagram that shows you exactly which strings you should be placing your fingers on and what fret the chord is found on.

There may be an occasion where you happen to be playing a note somewhere on the guitar and realize how much you like the sound. There are always chords that can be built around that note and the chord finder will help you discover them. When you play that note in the chord finder it will identify the note for you and then you can simply find the corresponding chord in the chord library. It’s a user friendly feature that can really come in handy. 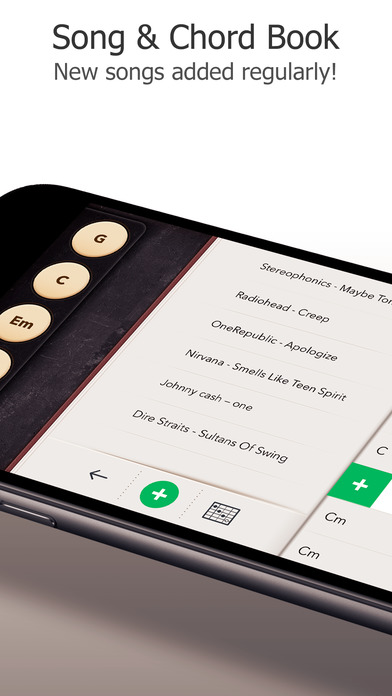 There is one other aspect of the free version of the app that’s less than ideal and that’s the way it uses ads. It’s perfectly understandable that the developers have used ads to help pay for the free version of the app as every creative person deserves to be paid for their work, but the ads are just a little too much. Every time you have to navigate to a new screen you’re forced to watch a 20 second ad and it’s likely a lot of users will simply get frustrated and move on.

There are more benefits to unlocking the paid version of the app other than just getting rid of the ads. You’ll also gain access to some more guitars including electric guitars that help to up the level of play you can achieve with this app. It’s a significant upgrade and well worth considering.

If you’ve ever wanted to learn how to play guitar or you just love the way a guitar sounds Real Guitar Free is the app for you. It has one of the most extensive guitar chord libraries of any app and the ability to choose between chord mode and solo mode is a big plus. If you choose to unlock the app with an in-app purchase you also gain access to several more instruments. This is a great app for any guitar lover.