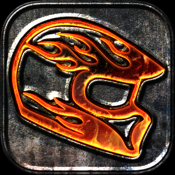 Rock(s) Rider by ECA Games is a physics-based motorcycle trials game for your iOS device. It’s on sale right now and is free, so get it while the sale lasts.

If you’re into race games, and love to weave your way around, over, under, and through obstacles, then this game is for you. There are tons of vehicles, and some of them you’ll have never seen before in video games: like bikes with rails, three-wheeled ATVs, and more. The vehicle you choose will act according to its own physics and design.

The visuals are pretty dingy and dark, which add quite a lot to the game. Another aspect that makes the game stand out is the fact that you have to place bets before each race.

On a negative side, the controls aren’t as responsive as one would expect. The vertical slider is too sensitive, the horizontal slider doesn’t let you do mid-air adjustments to any precision, and the default setup is very stiff. If the developers would fix the controls in an update, this game would deserve a five-star rating.

The game has different environments in which you will race, hill climb levels, over 110 challenges, 50 achievements, a great soundtrack, realistic bike physics, and side-by-side races with the Boss.

Rock(s) Rider was updated to Version 1.1.0 on December 12, 2012. The update added a bunch of features, fixed some bugs, added some levels, and more. This version has a total of 256 customer ratings with an average of 4.5 out of five stars. Feedback comments are mixed.

As mentioned, I really think the game would be improved greatly if they fixed the sensitivity of the controls. Other than that, there is nothing bad to say about this game. It’s just different enough from all the

other race games that it’s interesting and fun. Check it out.