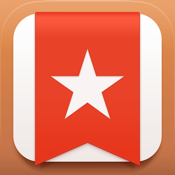 Wunderlist for iPad by 6 Wunderkinder is a great app for staying organized and making sure all of your errands get done. Whether you need a simple to-do list or a detailed set of reminders, you will find Wunderlist to be a very helpful productivity app.

Features include creating lists, reminders, recurring tasks, and subtasks. Furthermore, Wunderlist allows you to share your lists and reminders with your friends and family via email.

With Wunderlist’s detailed functionality, you could create a birthday or Christmas wish list to share with your family, create a list to organize a game or movie night with friends, or even arrange guests and catering for your wedding. The possibilities are endless!

Wunderlist also supports cloud syncing so you can keep on top of things regardless of which of your iOS devices you have to hand.

Wunderlist for iPad was updated to version 2.0.5 in mid-February of 2013. The current version has a total of 385 customer ratings with an average rating of 4.5 out of 5 stars.

I tend to be terribly forgetful with certain things so I have started frequently using Wunderlist to create shopping lists to save on repeat trips to the supermarket. I also recently recommended this app to a close friend who used it to organize her housewarming party. The party was a great success so I assume Wunderlist played at least a small part!