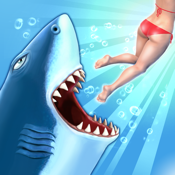 Hungry Shark Evolution by Future Games of London is a fantastic app where you’ll play a shark instead of the person.

In this survival game, you’ll start out playing as a pup and grow into a gigantic shark. Enjoy the amazing 3D graphics as you devour everything in sight in this underwater world.

You’ll eat turtles, seat creatures, unlucky fisherman, and swimmers as you continue to grow and need more food. You’ll have to fight off subs, other sharks, and strange and wonderful creatures of the depths.
When you string together bonuses, you will earn huge scores.

Find treasures so you can earn gems and coins to spend on rewards. As you progress, you’ll be able to unlock different sharks.

Hungry Shark Evolution was updated to Version 1.3.5 on February 16, 2013. The update made bug fixes. The current app has a total of 388 customer ratings with an average score of four out of five stars.

I really enjoyed this game, as much as I am terrified of sharks. I would never play if I had to play the

swimmers but playing from the perspective of the shark was really fun. The only improvement I would make is the load time.