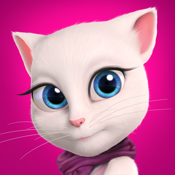 Talking Angela by Out Fit 7 Ltd. is the app everyone is talking about so why not see for yourself what the hype is!

Join Talking Angela, a beautiful white cat who just so happens to live in Paris. Angela is quite the fashionista and loves everything to do with style and of course she expects to be treated like a princess at all times. Features of this game include being able to pick out Angela's clothes, chat with her, smile at her, buy her presents, and more.

In order to chat with her you can type in the text to get things started. Angela will answer you with voice and text no matter what the topic is. You can even ask her to tell you a joke, sing you a song, and buy you a drink. Chatting with Angela is only available in English.

There's plenty of more fun you can have with Angela such as petting her, poking her to see her angry side, getting Angela to read you a fortune cookie, surprising her with gifts, communicating with her through face gestures by using your front camera, and even changing her clothes.

With this app you’ll feel as though you have a feline companion with you at all times.

Talking Angela was updated on Jan. 19, 2013 and currently has 1,515 customer ratings with an average rating of four out of five stars.

This Talking friend is one that shouldn’t be missed. Sure she’s sweet and cute but she’s also got some sass to her which you’ll have plenty of fun with.

For: iPhone, iPod touch, and iPad with iOS 4.3 or later. Talking Angela is optimized for iPhone 5.