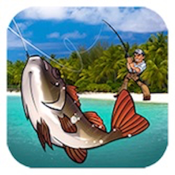 Fishing Paradise 3D by Bass Professor is an in-depth fishing simulator that will see you creating your own fishery and earning coins and XP to unlock new fish and locations, as well as lots of other exciting features.

This game features more than 50 different kinds of fish with some rare varieties that will require you to hone your fishing skills in order to catch. Each fish has its own characteristics and will provide its own challenges when you try to bag one.

You'll start with just a small piece of land and turn it into a stunning setting of lakes where you can hold your own multiplayer tournaments and invite friends along to play, as well as stocking your fishery with your favorite varieties of fish.

Fishing Paradise 3D was updated to version 1.0.6 in mid-May of 2013. The current version has not yet received enough customer ratings to generate an average score; however, all versions have so far received a total of 29 customer ratings with an average rating of four out of five stars. Feedback has been positive so far.

I’m not the biggest fishing enthusiast but Fishing Paradise 3D is presented gorgeously. The idea of creating your own fishery is a great feature and earning coins and XP adds a nice element of progression to the game. This could be one of the best fishing game apps out there.