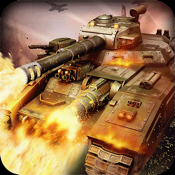 Battle Alert by xing cloud is a strategy game that will have you rallying the troops and using powerful weapons to destroy enemies and seize control of valuable resources.

This game features 22 different kinds of vehicles including a selection of tanks, air planes, and infantry units. You must develop your forces to protect your base, branch out, and take over the region.

As you play through the single-player campaign you will encounter many different kinds of enemies and challenges across a variety of environments. Strategy is the name of the game as you balance your efforts to build your units, mine resources, and launch formulated attacks.

Battle Alert was updated to version 1.5.2 in mid-May of 2013. The current version has a total of 128 customer ratings with an average rating of 4.5 out of five stars. Feedback comments have been very positive.

This is certainly a fun little strategy game. The graphics are pretty neat and although the concept is quite simplistic, there is plenty of content in the campaign. I would like to see an expansion of various elements in future updates with things like new weaponry and units, new maps, and so on; overall it's a very good game.