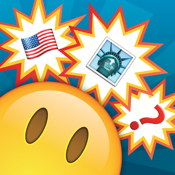 Emoji Pop by Gamoji Limited is a game that adds a whole new dimension to the guess-the-word genre of games by using emoticons as clues, meaning you will have to think outside the box a little more than usual if you expect to guess correctly.

If you enjoy playing games where you have to guess words and phrases based on image clues, you’ll love this new take on the genre. You will be provided with clues in the form of smilies and emoticons and you must guess the word or phrase using the limited selection of letters provided.

Most of the answers in Emoji Pop are based on popular culture so the answer will never be too far from your knowledge.

Emoji Pop was updated to Version 1.3.1 on May 25, 2013. The update fixed a bug that affected users' ability to update to Version 1.3. The current version has a total of 174 customer ratings with an average rating of 4.5 out of five stars. Feedback comments have been positive.

This is a really nice spin on the genre and is certainly a heck of a lot of fun to play. The clues and method of guessing are all standard affair but the subjects are nicely scattered and varied and Emoji Pop is visually presented very nicely.