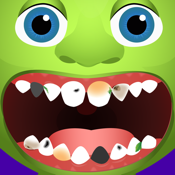 Monster Dentist is a universal app created by Ninjafish Studio, known from other dentist games as well as from several makeover games. In Monster Dentist you use a wide variety of tools, of which most are locked at the start of the game, to brush, floss, drill, clean and pull the teeth of young monsters no one has ever heard of.

Welcome to the dentist office

Monster Dentist is a free to play game, which monetizes itself by only having two out of 50 monsters to operate on. To unlock more monsters, you need to dish out $4.99 for four extra monsters, each with more teeth problems than the previous one. The game starts out with young Edger the squid person, who has rotten teeth, plaque and bad breath. As the dentist, you use the tools at your disposal to get rid of young Edger’s problems. Mouth water gets rid of his bad breath, the tongs pull out teeth and a soft brush will clean the plaque off his teeth. This all speaks for itself, but without any tutorial given, it can be quite confusing for younger players, for whom the game is obviously designed. 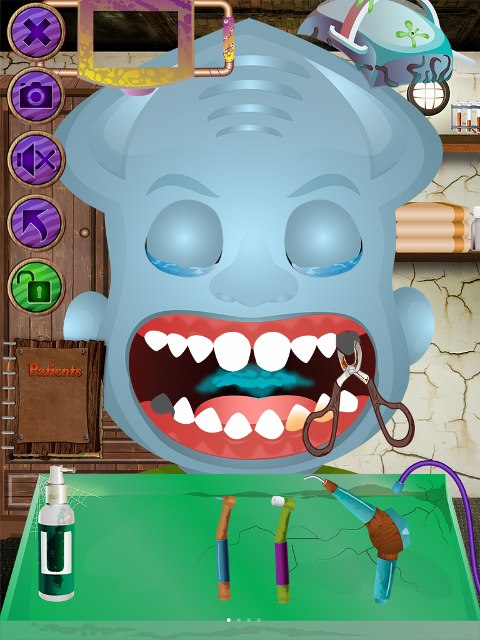 When Edger has been completely healed, he simply returns back in the patient file with three all new problems. At all times you can come back to the same patient after you fixed his teeth to try a new set of reoccurring tooth problems. There are several different toothbrushes and flossing tools to be used, but none of them seem to add anything to gameplay except the fact they look different. A complete set of skins for these brushes or tools will cost $2.99. With the extra monsters you can buy also come a whole new set of problem which you can fix with a ton of different tools, like a lamp, and X-ray machine, and other dental instruments. 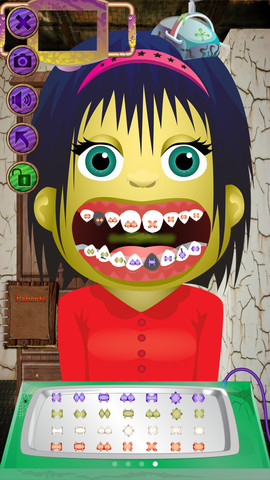 The controls of Monster Dentist are simple, yet can be amazingly frustrating. Trying to select a tool will sometimes give you accidental control of a different one. Not that this makes a difference, as in this game you can’t really do anything wrong. Placing braces on monsters teeth is even harder, as dragging a piece of brace over a healthy tooth will just make it stick to that, while the game clearly points at another tooth. 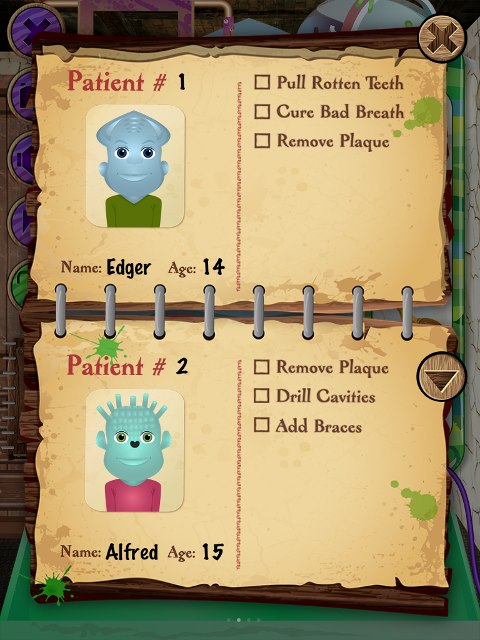 Monster Dentist is clearly meant for the youngest children. The graphics are simple but clean, but both gameplay and the music are very repetitive. While playing, there is nearly no feedback given to the player on what they do, and the monsters just keep smiling, they don’t even squirm when a tooth is pulled. Download this free app for your toddlers, but make sure to switch in-app purchases off as I can see kids able to buy all the extras in the game, which can rack up a nice amount for your credit card statement. Monster Dentist is available in nearly any language imaginable.