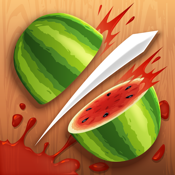 'Fruit Ninja: Puss in Boots' Is As Irresistible As Puss's Eyes

While blockbuster games such as Angry Birds and Cut The Rope have spawned sequels, Halfbrick Studios only recently released one for its wildly popular Fruit Ninja: Puss in Boots was released. At first glance it might look like a Shrek themed version of the original but with the introduction of a brand new "Bandito" mode, it is a lot more than that. Just like in Fruit Ninja the controls are simple: just slide your finger across a fruit when it appears on the screen to slice it. Combos of three or more fruits give you bonus points and accidentally hitting a bomb will result in game over. By completing tasks of varying difficulty, different swords and backgrounds can be unlocked and while there is no performance advantage between items, it's all about looks. There are two different modes of play included: Desperado and the  aforementioned Bandito. Desperado is just like Classic mode in the original with the goal of surviving without letting three fruits drop or accidentally slicing a bomb for as long as possible. Bandito mode on the other hand is completely new. In Bandito mode the goal is to make it through a variety of challenges in three acts and into the finale while scoring as high as you can. You have three lives to make it as far as you can and your performance is based on three different aspects: (1) number of fruits sliced (2) your ninja reflexes and (3) slicing efficiency. Both Gamecenter and Openfeint are included for highscores and achievements. Though in the grand scheme of things Fruit Ninja: Puss in Boots is a glorified advertisement for the Puss In Boots movie, it is so much fun that you forget about it. The easy controls are great, the Spanish music sets the mood, and the addicting gamepley keeps you wanting more. If you liked the original game or just looking for a fun and easy pick-up game to play this is definitely for you. (Oh, by the way, due to the clamor from all the game's fans, the tomato is now included). AppPicker Rating: 5 / 5 Stars Pick It Up in the App Store: Fruit Ninja: Puss In Boots HD (iPad) Other apps by Halfbrick Studios