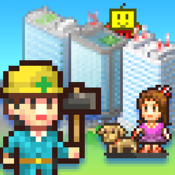 Venture Towns by Kairosoft Co. Ltd. is a simulation game where the player is a part of a mega-conglomerate in charge of building a city for employees to work, shop and live. With past generations of simulation games becoming popular over the years like Will Wright’s SimCity, Kairosoft’s app fits in well within the genre. Venture Towns is a complex game requiring a bit of multitasking and trial and error to get into the swing of game play. However, once the player gets a hang of the game mechanics the evolution of game play feels organic and whatever mistakes happen don’t dampen the fun. The game proposes a special focus: create an urban area for employees to come, live and prosper. With that goal in mind Venture Towns provides players multitudes of tools to use. The tutorial is rather bare bones with detailed instructions of what the tools do but no real game play advice. The player starts by creating a character and building a house for the character to move into. The town is small with several residents and a scattering of stores needed to keep a simple community going. 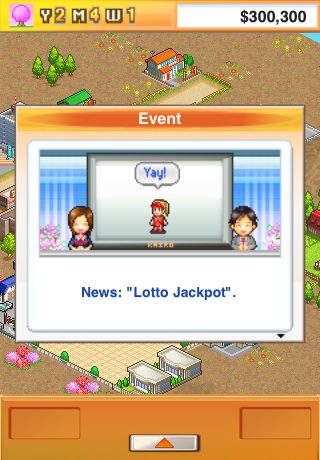 By micro-managing the building of stores, upgrading jobs for citizens and researching new businesses –thus creating new jobs- the player grows a small town into a mega city. Other elements include parks, upgrading the roads, and city beautification through plants which give stat points to the citizens in the area. All these elements are hard to get a grip on and it took me one failed attempt before I could build a city that wasn’t constantly in debt. However, once the player gets a feel and balances all these elements Venture Towns can be quite addictive. The game uses a grid map to organize the city and there is a zoom in and out feature which helps with placing or selecting the right item. However, once the city gets bigger it gets hard to select the right item on the map. Combos are another option which becomes available in the form of placing select stores together and they affect citizen stats and land price. Venture Towns is a fun, addicting simulation game which will whittle away the free hours, as long as the player is patient. There are a few bumps along the road to becoming an ace city developer, but once the player gets a grasp of the tools and micro-managing Venture Towns really shines. AppPicker Rating: 4 / 5 Stars App Store link: Venture Towns Other apps by Kairosoft