jungle animals of my kids - no ads 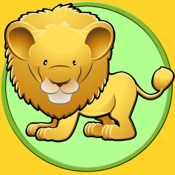 first game:
In this game butterflies carrying targets. Your child must shoot the targets to release the butterflies and help them fly. Maximum points is necessary to go to the next level. When a level is successful an image of jungle animal becomes available in the image gallery.

second game:
In this game your child will burst as many balloons to the next level. While the environment is running, just press on the screen to pop the balloons visible. When a level is successful an animal image of the jungle becomes available in the image gallery.