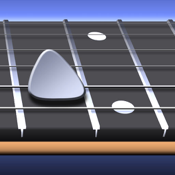 One of the first and best-selling guitar apps on the iPhone (reaching position 14 in the Top 100 Apps List), it has since been recommended by such media sources as The New York Times and T3 Magazine. Guitarist was used in the official Apple Guided Tour video for the launch of the iPhone 3GS.

Guitarist is an innovative guitar simulator for the iPhone that ensures you will never again find yourself guitar-less during an inspirational moment.

KEY FEATURES
-----------------------
- Record and save your song for later playback.
- Fretboard scrollable up to the 21st fret.
- Display between 3 to 10 frets on-screen.
- Record two guitars (eg. rhythm, lead), each with their own effects, into one song.
- Unique and innovative guitar interfaces allow _anyone_ to play amazing guitar solos.
- Pitch bend by actually dragging strings. Tilt your iPhone for WahWah and Whammy effects.
- A choice of acoustic and electric patches available.

DESCRIPTION
---------------------
Experienced players can use Guitarist on the road to experiment with chord progressions, and record riffs or solos on a "musical notepad" for later study back in the studio with their full kit. While novices can program in existing tablature and chords to popular songs, and then give note-perfect performances to their friends. Guitarist features a selection of guitar interfaces that have been especially tailored to the iPhone to give, for the first time, the ability to truly play music written for a five foot mechanical device on a three inch touch screen.

- The 'Manual Fret' guitar is an emulation of a real guitar. Traverse the full fretboard to the 21st fret, then hold the string at a fret and tap or strum over the pickup to sound the appropriate note. Fret and strum chords, or slide solo notes.

- The 'Hammer-On' Guitar assists your playing by removing the concept of plucking the string, and allowing you to concentrate instead on fretting notes, using the same principle as the real-world guitarist technique of 'Hammer-On'. Press on a fret to instantly play that note, and then can either Hammer-On again to a higher fret, or Pull-Off (remove your finger) to a lower fret. This allows complex solos to be played at speed. Again, the full 21 frets and open string are available.

- The Tab Guitar takes the opposite path from the Hammer-On Guitar and removes the concept of fretting strings, allowing you to concentrate on plucking notes. Songs are pre-programmed into the Tab Guitar, and then played back live, measure by measure, by tapping or strumming at the pickup. This is represented in Guitarist through the use of the standard guitar notation 'tablature'. You will be able to find tablature to almost any song on the Internet, and anyone can use the Tab Guitar to play their favourite songs live. The Tab Guitar can even be used as a songwriting tool, with 18 of the most common chord types across all keys accessible with a finger-press, or you can program in your own chord pattern via a representation of the fretboard. Program in complex chord progressions, and then strum them back live at full speed.

- The Scale Guitar allows you to play runs through a large number of musical scales (from Blues to Chinese) in any key. Both the key and scale can be changed at any time and the scale played by running a finger up and down the guitar neck. Not only can the Scale Guitar be used as a live performance instrument, but it provides a useful teaching aid by displaying the notes in each scale and key as you play.

Please note that Guitarist does currently not support tuning for left-handed playing.

Guitarist is a great iPhone and iPad app for those of you who would like to learn how to play guitar but either lack the time, money, or patience to actually learn the real thing. You’ll be able to strum and tap your way to pocket superstardom in no time with this cool little iGuitar at you...