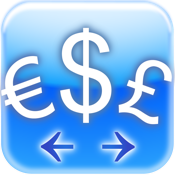 ◆ 220+ currencies supported !!! Much more than any other converter on the App Store

◆ The only Currency Converter supporting all the world currencies, Bitcoin included

◆ Make use of Forex exchange rates, and it works offline, too

Winner of the iPhoneFootprint excellence award, 2008, and born from one of the top 10 most downloaded MacOs X widgets.

This Currency Converter has the most comprehensive set of features, among them:

◆ support for more than 220 currencies: all the trading currencies of the world plus many legacy currencies and even unofficial or virtual currencies (like the Linden dollar for Second life, or Bitcoins). Commodities rates (gold, silver, palladium, platinum) are supported as well

◆ support for a conversion table like interface (like the successful one I introduced in my Currency Converter widget for the Mac), with support for conversion as you type, simple math expressions evaluation, optional conversion fees evaluation: just tap on a row in the table, enter your value and see how it works

◆ gorgeous graphic interface with a comprehensive set of informations readily available, like the currency code and country, the country flag, the currency symbol

◆ simple and fast currency selection: just tap on the 'Edit' button to edit the table and add new currencies, remove currencies or modify the currencies currently in the table; then the list of available currencies will appear, and you can have it sorted by currency name, currency code or countries; you can search the list, too

ATTENTION: THE BASE CURRENCY IS NOT FIXED ON USD: JUST TAP ON ANY OF THE VALUES TO CHANGE IT AND THAT BECOMES THE NEW BASE

Currency Converter app review: ideal for travelers and traders. Whether you are a trader or you travel to a lot of different countries, Currency Converter - Money Exchange Rates for more than 220 currencies! is well worth keeping on your iPhone and iPad to ensure you always have the latest exchange ...