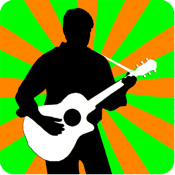 "This is mind blowing. You can make music on this instrument quickly and easily. It is way beyond the other guitar apps for its ability to let you focus on music making without feeling like you are going against the technology! If you are a musician you will be smilling in moments after you load this in to your phone." - Jordan Rudess ★★★★★

"This is the App (especially since I own it's Electric Partner also) that in my mind 'broke the sound barrier'. It outdistanced anything I had ever seen and would NEVER have believed possible back in the day. I have owned this since it came on the market and it still blows my mind." - Mister_App_Guru ★★★★★

"All around an ingenious way to play on the iPhone even if You Don't Play the guitar. I'm certain this WILL inspire more people to pick up the real thing." - T.Branton, ★★★★★

"The first truly *musical* app for the iPhone ... While other virtual instruments are severely limited by the iphone's dimensions, this one caters to its strengths. Oh Joy!" - Wintancian, ★★★★★

Learn and play your favorite songs with Guitar, the amazing acoustic guitar app for your iPhone or iPod touch. More than just a virtual fretboard, Guitar is an instrument optimized for performance. You can perform songs with any combination of chords and melodies on Guitar's highly playable and easy-to-use interface.

RECORDING
✓ Record performances with optional metronome
✓ Play along with recordings, even use different sound
✓ Speed up or slow down performance after recording

AIRPLAY
✓ A jukebox of shared songs from around the world
✓ Share your performances and be rated by other guitarists
✓ Download songs and performances from other users
✓ Check out the AirPlay charts: http://fdgm.us/AirPlayG