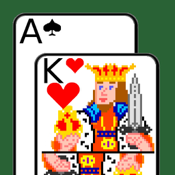 Patience (also known as solitaire) is a both tranquilizing and relaxing game originally coming from france. It is a card game that actually needs some patience and a high level of concentration to be played. This game is good to train your brain and needs some strategic approach to get mastered.

This implementation of Patience is very intuitive in game play. It offers five kinds of solitaire games.
• The "Standard" game is easy to play but extremely hard to master.
• The "Gallery" has medium complexity and a satisfying final picture.
• The "Small Klondike" is a common game based on one card deck thus quicker to play
• The "Big Klondike" is a very common game having rather low complexity.
• The "Eight x Eight" has medium complexity but needs the right strategy to be mastered.

The fancy cards having optimized rendering for iPhone and iPod touch gives you the feeling of really playing cards right in your hand.

Interesting details:
• five solitaire games in one pack (still more to come)
• Wide screen game play having big realistic looking cards
• Drag and drop cards with your finger
• "Double-tap-drag" to easily move a stack of cards
• Unlimited undo of moves within one game (even after leaving the app)
• Hint and "Clean up to Foundation" function from game menu
• Real random card game - you never know if you actually can win. But hey - that's the thrill, isn't it?
• Silent game - play wherever you want without disturbing anyone.
• no scoring, no time pressure, not just another windows card game clone
• Illustrated game instructions included
• Fully localized german and english version (even the cards display is localized)