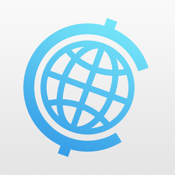 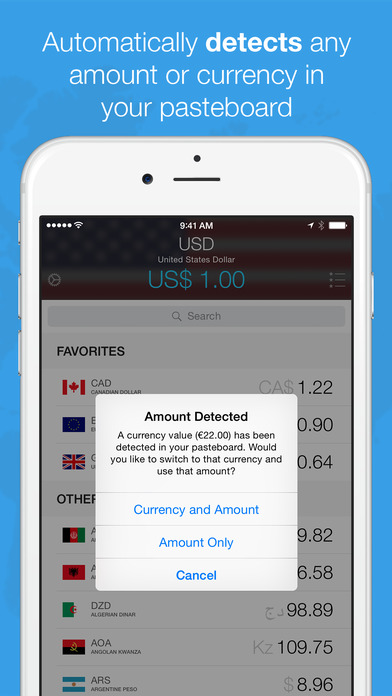 This brand new version has been rethought and rebuilt from scratch. Currencies 2.0 takes a completely new approach to exchange rate conversions.

All your currencies in one place - Set the source currency, set an amount and scroll through over 160 currencies to quickly convert them.

Recent and favorite currencies - Swipe left-to-right on any currency to add it to your Favorites, which are always visible on top. Recently used currencies are also stored nearby in order to make them accessible quickly.

Intelligent converter - Paste any text that includes a numeric value into Currencies on your iPhone and the app will figure out what to do. Include a currency code or symbol and Currencies will automatically set it as the source currency!

Currency lookup - Easily search through dozens of currencies from the search field. Don't know which currency is being used in a particular country? No problem! Search for a country name and the related currency will show up in the results!

Location aware - Currencies can track your location and can automatically set the local currency as your source when you travel to another country. Neat!

Today extension - Need to get a quick look at the current conversion rates? Add Currencies to your iPhone's Today view and access that information quickly. Tap on a currency to make it source and instantly update the conversion rates.

CURRENCIES IS ALSO ON APPLE WATCH:

Perform conversions right from your wrist. We have thought this through quite a bit and Currencies takes advantage of this new revolutionary device in ways we could only imagine some years ago.

Dictation - Currencies is built to take advantage dictation on your Apple Watch. Tap the top amount, select a previous amount or tap the dictation button to initiate a currency conversion. Some examples:

Currencies will automatically figure out what you want and select the right currencies for you and compute that conversion. It cannot be any better than this!

Don't know which currency is being used in a particular country? No problem! Just dictate the country and Currencies will figure out which currency it should use! Some examples:

You can even change the destination currency through dictation:

Saying "To US Dollars", "Into Euros" or "In Australian Dollars" will set the destination currency to USD, EUR or AUD.

Of course, you can still select currencies by taping their respective buttons. You'll then be able to select a currency from the most recently used or favorite currencies.