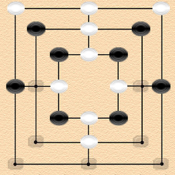 *** IMPORTANT NOTE ***
A new extened version of merrills is available for iPhone and iPad!

Play the traditional board game Merrill’s (also known as Nine Men's Morris, Merles, Mill, Merels, Dam, Muelle or Merelles) right on your iPhone/iPod Touch(PvP mode) or against your friends via Wireless-Lan (WLAN) or versus the computer (five different computer strengths)

Rules:
Every player gets 9 stones of one color. The players place the stones one after another by touching on crossings or corners on the screen.
When they have no more stones left, they move the stones along the lines.

Whenever a player has three stones in one row (so called Mill), he can remove one the opponent's stones that is not part of a mill itself. (Unless there are only mills left on the board)
To make it easier, the potential removable stones become visually marked.
If a player has only three stones left, he can jump with them on every free position on the board.
The player with less than three stones left or no possibility to move loses the game.

The tactic is to build own Mills and try to hinder at the same time the enemy's efforts building a Mill. The player who manages to build a so called "Quandary" got an advantage. A "Quandary" implies that with every opening of a Mill, through moving a stone, another Mill gets closed.

Playing via Wireless-Lan (WLAN):
The game finds all available games of iPhones/iPod Touch which are connected to the same Wireless-Lan.

New in Version 1.3:
- undo function (take back as many moves you want)
- ten different board skins
- save selected board in settings
- safe abort function (confirm abort)
- show number of played moves at the end of the match
- direct feedback function via mail