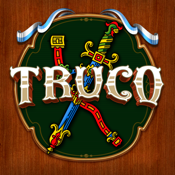 Truco is a popular card game played in Southamerica. Of the several variants known of Truco, this is the Argentinean way of playing it. Each player gets three cards per deal, and plays them out in tricks.
The main objective of the game is to win 30 points. There are three ways of scoring points:
Flor, which is a hand of three cards of the same suit; If no one has Flor, points may be scored for Envido - a combination of two cards in a suit, or failing that, a single card;
In addition to Flor or Envido, points are scored for the Truco, which involves taking the majority of the three tricks, or the first trick if one trick is tied.
It is possible for a player who has Flor to pick his best two cards and bet on Envido instead of Flor, on the chance of getting more points. Bets on Flor or Envido are made during the first trick, while bets on Truco can be made at any time. If a player has no interest in the Flor or Envido can immediately bet on the Truco.
However, if another player wants to bet on the Flor or Envido, they will have to do so before answering the Truco bet.