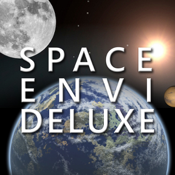 An infinite space museum in your pocket! Space Envi Deluxe turns your iPhone or iPod touch into a Web-based space museum, with exhibits and archives from around the universe. It gives you easy, full-screen access to an out-of-this-world set of space photographs, grouped into major collections.

From the Earth Observatory here at home, to the Space Shuttle and Space Station in low-earth orbit, to each planet and its moons, to distant galaxies photographed by the Hubble telescope, Space Envi Deluxe displays Web-based space images the way you would expect on the iPhone: full screen, with multi-touch controls, in automated slide shows.

Space Envi Deluxe is based on the acclaimed iEnvision Web-image browser, which organizes images from the Web into groups, with indexed lists in each group. With iEnvision not only can you view Web-based space photography, but also classic artwork, children's books, comics, manga, news, travel guides and more.

Space Envi Deluxe goes beyond our top-selling Space Envi application by including:

- The ability to save any image
- A complete archive of the Astronomy Picture of the Day (15 years worth)
- A similar period of Hubble photographs, organized by subject
- Stunning earth views from eight years of the Earth Observatory
- Shows from every Space Shuttle flight
- Access to the most recent images from missions to Mars, Saturn and beyond
- Each planet and its moons
- Year-by-year archives from the Kennedy Space Center since before Kennedy
- Mercury, Gemini, Apollo and Skylab manned missions, plus dozens of unmanned ones
- A greatly sped-up display