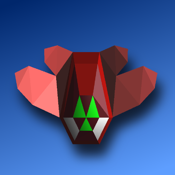 Critical Mass (aka Critter) is a vertical arcade shooter. Save the world while you fly through some beautiful space scenery filled with stars and nebulae.

Your world has been infested by an aggressive army of space critters. Overrun and unprepared, your government was unable to defend its precious resources. As a last effort to recapture some of the "goodies", you have been placed into a tiny spacecraft and sent after them.

You control your spacecraft at the bottom of the screen, moving left and right in order to avoid incoming bombs and kamikaze attacks from the alien space critters while at the same time firing your own missiles. Collect the goody containers dropped by defeated critters.

CONTROLS:
Tilt left or right to move the spacecraft.
Tap the screen to shoot missiles.