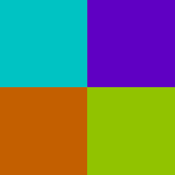 A sequel to Follow-Me, this game takes the challenge to the next level. Yes, the colors, patterns, and timing are still there but the colors now shuffle around the screen to new positions!!! Your job is to shuffle the colors back into their original position IN REVERSE ORDER!!! How long of a pattern can you remember? Shuffle-Me is a game that challenges the player’s memory, motor skills, and reaction time.

If the player does not respond to a shuffle sequence, an alert message is displayed after a period of time informing the player that no color was moved. Acknowledging the alert re-starts the game returning to the first level.

The player is also alerted when the colors are moved in the wrong sequence. The final level that the player reached is part of this message. If the player shuffles a color but drops it back in the original spot, the move is not counted as a miss. This allows the player to shuffle a different color if they feel they are moving the wrong one.

Finally, the game can be rotated and played in portrait or landscape orientations. It is localized for English, Spanish, and Portuguese.