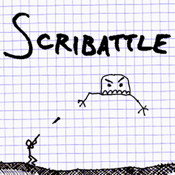 Scribattle Lite is a fast-paced game where you must help your stick-man warriors defend their planet from a hostile Scri invasion. Use touch controls to defeat wave after wave of attackers, pushing your fingers to the limit!

- Unique touch-screen controls, including multi-touch support
- Hand-drawn look that is "beyond retro", taking you back to the days of pen and paper
- The entire set of levels repeats after completion, but tougher each time around, for unlimited play
- Four difficulty levels, one to match each gamer's ability

This is a free version of Scribattle with fewer levels and simplified gameplay. Scribattle includes the following additional features:

- 50 levels (compared to 10 in the Lite version)
- An additional "boss" creature, the Pent
- Option to resume your last game where you left it (in case you're interrupted by a phone call, etc)
- Option to begin a new game starting with the highest level you've ever completed
- No in-game ads


If you enjoy games like Stick Wars, Space Invaders, Missile Command, and SketchFighter, you should take a look at Scribattle Lite!

Based on some comments we've received, some people don't seem to understand how this game works right away. Here are the basics:

To make your warriors shoot, touch one of them and quickly "stroke" your finger in the direction you want to shoot. Don't forget multi-touch! Using several fingers, you can shoot using two or three warriors all at the same time.

Pause the game by tapping in the score area at the top of the screen.

Some players have observed that your warriors die easily, and can't seem to protect themselves from enemy fire. In fact, you can activate a warrior's shield by pressing and holding a finger on him. The shield stops all bullets, but won't protect you from the dreaded Noodly Appendage.