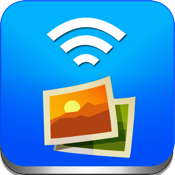 There are many photo sharing apps in the market. Photo Share is arguably the easiest way to share or upload photos with a great user interface. With the app, you can upload photos to Flickr, Facebook, Picasa, Twitter etc with just a flick of your finger. If multiple users are on the same WiFi network, you can share photos with others users the same way, with just a flick of a finger.

Here is how easy it is to use Photo Share. You can add photos from your camera roll or any of your albums using the '+' button. Once your photos are added, select the destination on the top and push/flick the photo towards the destination icon. Thats it. Your photo will then be uploaded/shared to the destination.

Photo Share supports multi-touch. Photos added to the workspace can be moved around within the workspace. You can move multiple photos with multiple fingers. You can also pinch to zoom in/out, rotate photos using the standard options. The Edit options lets you delete photos from the workspace.

To upload your photos to Flickr, Facebook, Picasa or Twitter, you'll first need to login to your Flickr/Facebook/Picasa/Twitter accounts. Once you are in, you'll be able to push/flick your photos to the destination. You can also upload multiple photos simultaneously. For Flickr, photos are uploaded as private by default. You can change this to public under the settings section. Photos uploaded to Facebook have to be approved before they show up in your Facebook page. You can choose the target album for Picasa photos. For Twitter uploads, you'll have an option to edit your tweet before you post your photos.

With this application open, you can also share photos with other users on the same WiFi network. Names of other devices will show up on the top. To share photos with those users, simply select the device and push/flick the photo upwards. At the receiving end, users will see the photos sliding on their application. Shared photos will automatically added to the default photo library on the device.

* Intuitive User Interface
* Easily upload photos to Flickr, Facebook, Picasa & Twitter with a Flick
* Share photos with others users on the same WiFi network
* Transfer photos from or to a computer from iPhone/iPad/iPod
* Multi-touch interface with ability to move/zoom/rotate photos
* Option to upload photos in private/public mode for Flickr

If you have any issues/suggestions/requests related to this application, please email us at support@touchmeme.com.

Additional information about the application is available @ http://www.touchmeme.com/photoshare.html