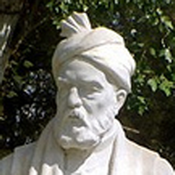 Now you can use the application on iPad in full screen!

The application has become a universal! You can use it on iPhone, iPod and iPad!

Ferdowsi (or Firdausi), (935–1020) is one of the undisputed giants of Persian literature. He is the author of the Shahnameh, the national epic of Persian people and of the Iranian World.

Ferdowsi was born in 935 in a small village named Paj near Tus in Khorasan which is situated in today's Razavi Khorasan state in Iran.
His great epic, the Shahnameh ("The Great Book": in Persian, Shah means king, monarch or dynast, but when it is used as a prefix, it means "Big", "Great" or "Major".), to which he devoted more than 35 years, was originally composed for presentation to the Samanid princes of Khorasan, who were the chief instigators of the revival of Iranian cultural traditions after the Arab conquest of the seventh century.

According to the Encyclopedia Britannica: The Persians regard Ferdowsi as the greatest of their poets. For nearly a thousand years they have continued to read and to listen to recitations from his masterwork, the Shahnameh, in which the Persian national epic found its final and enduring form. Though written about 1000 years ago, this work is as intelligible to the average, modern Iranian as the King James version of the Bible is to a modern English-speaker. The language, based as the poem is on a Pahlavi original, is pure Persian with only the slightest admixture of Arabic.

To simplify study “Epic of Kings” by Ferdowsi the application supports full text search within all included texts. This is very useful when you need to find a quote or information on a particular subject but don't know where you should looking for.