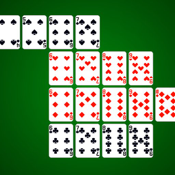 The card is distributed to the player of four people. The player with the card of seven puts out to the place, and begins playing a game from the player that puts out seven of the diamonds. A yellow mark attaches to the player where order has turned.
The frame is displayed on the card that can be put out.

The order is decided in order of putting forth all cards in hand completely.

When it is the same figure, it is possible to take it by turning it over by putting 52 all cards for behind, and doing two taps sequentially.
Order moves to the following player when the following card can be continuously turned over by taking the same figure, and it is not the same.
The player that takes a lot of cards when all cards are taken becomes a win.

The volume of BGM and SE and the difficulty can be set in the OPTION menu.
The value grows by the right side setting of each value.