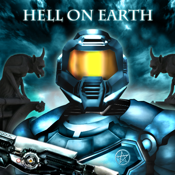 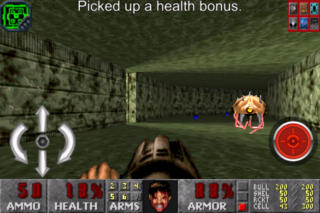 *TOP 100 (Adventure) in most of the major regions (USA, UK, Japan, Germany and Australia)


Welcome to Hell! After fighting the demons back in outer region of the Solar system as a part of an elite team of Space Commandos you are being teleported to back to Earth, only to find that it too has fallen victim to the hellish invasion, leaving billions of people dead. You are all that stands between future of humanity and demons from Hell. So what are you waiting soldier?

Based on the popular Doom™ community project Freedoom and powered by modified legendary Doom™ engine, the Hell on Earth will offer a new and unique experience to any Doom™ fan. With 26 professionally designed unique new levels and nine new awesome weapons and new set of evil and dangerous enemies, this is a one game that you don’t want to miss. We have deliberately retained the original Doom™ iPhone interface look and feel with our own artwork so the fans will feel comfortable with this Doom™ community project.

Single player mode:
Fight through 26 levels/missions as you defend earth from the demons from Hell.

Multiplayer mode:
Play against your friends in the Deathmatch mode or team up with your friends to defeat the demons from Hell.