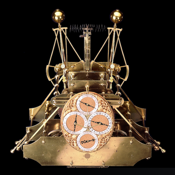 It's an amazing time we live in with satellites and gps but try to imagine 300 years ago. Ships put to sea with no way to determine their location once they lost sight of land! In the 1700s John Harrison set out to change maritime navigation forever with his first experimental Sea Clock, H1.

Enjoy and marvel at this marine timekeeper on your iPad and at the same time help support the National Maritime Museum in Greenwich, London.

John Harrison's first marine timekeeper (known today as H1) is the first experimental sea clock made by Harrison, to enable navigators to find longitude at sea and is one of the great milestones in clock-making history.

The images are of the actual H1, built nearly 300 years ago, so the chapter rings can be difficult to read.

If you want to display GMT set your iPad clock to UTC.

"Built of brightly shining metal, with rods and balances sticking out at odd angles, its broad bottom and tall projections recall some ancient vessel that never existed. It looks like a cross between a galley and a galleon, with a high, ornate stern facing forward, two towering masts that carry no sails, and knobbed brass oars to be manned by tiers of unseen rowers. It is a model ship, escaped from its bottle, afloat on the sea of time." "No fanciful movie about time travel, despite the best efforts of Hollywood set design, ever presented a time machine as convincing as this one"
From Dava Sobel's Best Seller 'Longitude' .

Based on Dava Sobel's book, the truly great movie, Longitude, is a dramatic account of John Harrison's life and quest for the Longitude prize and of Rupert Gould's life-long project to restore the Harrison timekeepers to their former glory.

Further information is available in the following publications: Time Restored: The Harrison timekeepers and R.T.Gould, the man who knew (almost) everything and Harrison both by Jonathan Betts and available from the National Maritime Museum Shop, www.nmmshop.com

A special Thanks to the people at the National Maritime Museum, Greenwich! It's been a great privilege to construct this animation of H1.

Version 1.6 Improved resolution of the dials when zoomed.

Version 1.5, Thanks to the Maritime Museum we now have the actual sounds made by H1's Grasshopper Escapement!

Version 1.4, added sound to the app, ticks and ship's bell including the dog watch and New Year's Eve bells. Toggle bells on/off by tapping the bell icon.
Note: Ship's bell is not part of Harrison's H1, it's just an additional feature of the app.