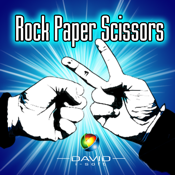 Rock Scissors Paper, the oldest game of the world, is now availablein a funny playable version for your iPhone and iPod Touch!

Shake it and leave the winning decision to your device! He will make the choice for you!

1) Play in 1 player mode: there are two fiends with an iPhone/iPod and both shake it to see who is the winner.

2) Play in 2 players mode: the screen split in 2 parts and the 2 players can play on the same screen and the destiny will show the winner!

Ready to play?
You'll love it.

THIS IS A VERY SIMPLE GAME! NOTHING MORE NOTHING LESS. SHAKE TO SEE THE WINNER!!!

2 people shake the iPhone/iPod and 2 simbol will be chosen:

Try also ABSOLUTE VINTAGE, an ultra cool app that allow you to put your friends faces into original style vintage photos and publish them to facebook in one click!