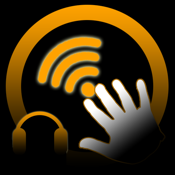 DiddyMidiDJ is a DJ Controller app that displays a touch sensitive virtual DJ mixing surface that is used to send Midi commands to an appropriate Midi enabled DJ application on a Macintosh.

DiddyMidiDJ may also be used to control other Midi receptive Software on a mac, but is optimised for DJ software.

DiddyMidiDJ has been tested with DJ mixing software Traktor Pro and has a Midi Message map similar to that on a Hercule RMX hardware surface.

DiddyMidiDJ requires DiddyMidThru to be running on the Macintosh OSX 10.5+ computer. This is a free download from www.diddysoft.com. DiddyMidiThru creates a virtual cable via wifi from the DiddyMidiPad to your DJ software. It advertises the Cable via Bonjour ( zeroconf) for ease of use.

Precision adjustment : The main sliders for Volume and Pitch Bend may be adjusted in more sensitive increments by touching the slider area further away from the main slider knob.

A preset Midi Map for using with TraktorPro can also be downloaded from the Diddysoft.com website.

Written by Diddy the UK DJ and Artist.

NB. You will need to have your own DJ software for the Macintosh. This application is not itself, an audio app but is a remote control for audio software on a mac.

Traktor Pro is a trademark of Native-Instruments and is used here for illustration purposes only.