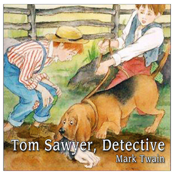 TOM SAWYER, DETECTIVE by Mark Twain (unabridged) was produced by Blackstone Audio and comes with what is perhaps the best audiobook app available (see below for features list).

A return trip down the Mississippi River to Uncle Silas’s farm is just the beginning of a yarn that includes twins, a diamond heist, a confidence man, a murder, and enough twists and turns to satisfy an avid mystery fan. Tom attempts to solve a mysterious murder and, along the way, Mark Twain examines the social customs, legal system, and family expectations of the time as only Twain could.

NOTICE: This app includes the same 5-star recording that is available through other retailers for higher prices. It is unabridged and professionally recorded at Blackstone Audio and read by Grover Gardner, who has been named one of the “Best Voices of the Century” and a Golden Voice by AudioFile magazine, he won the prestigious Audie® Award in 2009, was chosen Narrator of the Year for 2005 by Publishers Weekly. You are not buying yet another amateur or volunteer narration. No clicks, background noises, throat clearing, mispronunciations, tinny voices or monotones will be found here.

“[Mark Twain’s] best work is not only classic humorous writing but a graphic picture of the nineteenth-century American scene.” —Chambers Biographical Dictionary

• EXPERIENCE. About 2 hours of narration. Created as a Folium enhancedAudio™ edition, this book includes extra functions and features not found on lesser players.

• OFFLINE LISTENING. You are airplane-ready! Once downloaded, listen uninterrupted without threat from a lost network connection. Downloads are usually just 5-10 minutes, but this may depend upon your network speed.

___________________
A sequel to The Adventures of Tom Sawyer, The Adventures of Huckleberry Finn, and Tom Sawyer Abroad, this is Mark Twain's satirical take on the immensely popular detective novels of the time. Like the two preceding novels, the story is told using the first-person narrative voice of Huck Finn. Once a staple of juvenile fiction, then banned as politically incorrect, Twain's well-told story brings to life its time and place.