iPronunciation HD for Google VS. Bing 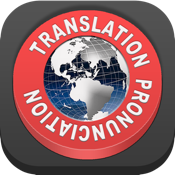 
Are you still looking for a full-text mobile
translation application easy to use?
Are you still worrying about the pronunciation
when you see the text translated?

* TTS(Text To Speech )of 24 languages . Truly natural sounding voices.
The audio pronunciation can be used on-line.

Other features
Favorites, history , send by email ,share to Twitter，Facebook