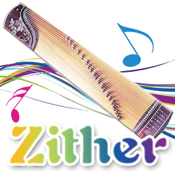 This time we bring you Chinese Zither- also called Guzheng to be played freely on your iPad!

The modern-day guzheng is a plucked half-tube zither with movable bridges and 21 strings. However, the number of strings may range anywhere from 15 to 25. A customized version even exists with more than 44 strings. The strings were formerly made of twisted silk, but at the turn of the 20th century most players used metal strings (generally steel for the high strings and copper-wound steel for the bass strings). Currently most performers use steel strings flatwound with nylon.

With Zither on your iPad,you can play classic and romantic music for your family and friends!