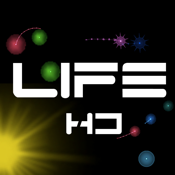 Watch life evolve in the palm of your hand! Oddly hypnotic and relaxing, Artificial Life is a simulation of the growth and evolution of microorganisms - basically artificial life forms. Initially, each organism is given a random set of rules governing its behavior. If the rules end up being useful for survival, the organism may live long enough to mate with another organism and pass its genetic code on to some offspring.

Over time, the organisms with the most useful behaviors will pass on their genetic code, leading to interesting patterns of behavior unfolding before your eyes - flocking behaviors, solitary predatory tactics, scavenging, and hiding are some examples - and all this behavior is evolving from total randomness.

In Sandbox Mode, you can adjust environmental factors as well as the chromosomes defining the behavior of individual protozoa. There is no overall goal in Sandbox mode, other than to enjoy watching life evolve over time.

In Survival mode, you get to test your own custom protozoa against a random population. See if you can do better than natural selection. The goal is to have your protozoa survive as long as possible. The simulation ends when your custom protozoa dies.

* Double-tap the screen to select an individual protozoa.

And, if you don't like how some of the organisms are behaving, you can always resort to the finger of death and destroy that which displeases you.

Queue up some music with your iPod app and then launch this app for some relaxing times in the microscopic world of Artificial Life.

You can read more about the app and view a video demonstration at:
www.stormyprods.com/alife

Thank you all for the feedback! It is appreciated. As time and practicality permits, more suggestions will be incorporated into newer updates. You've all suggested lots of great ideas!

** The Science Behind the Simulation **
This app was inspired by the computer science technique known as Genetic Algorithms. The idea behind genetic algorithms is to apply evolutionary techniques such as inheritance, mutation, and selection to computing problems. I thought, why not go full circle and apply these techniques to a basic biology simulation? This app reflects one such attempt. I hope you enjoy it!