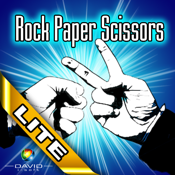 Rock Paper Scissors , the oldest game of the world, is now availablein a funny playable version for your iPhone and iPod Touch!

LITE VERSION LIMITATION:
This LITE version is limited to 15 consecutive play. If you like to play more you have to close and re-open the app or consider the upgrade to the full version for infinite games and no advertisement!

Shake it and leave the winning decision to your device! He will make the choice for you!

1) Play in 1 player mode: there are two fiends with an iPhone/iPod and both shake it to see who is the winner.

2) Play in 2 players mode: the screen split in 2 parts and the 2 players can play on the same screen and the destiny will show the winner!

Ready to play?
You'll love it.

THIS IS A VERY SIMPLE GAME! NOTHING MORE NOTHING LESS. SHAKE TO SEE THE WINNER!!!

2 people shake the iPhone/iPod and 2 simbol will be chosen:

Try also ABSOLUTE VINTAGE, an ultra cool app that allow you to put your friends faces into original style vintage photos and publish them to facebook in one click!