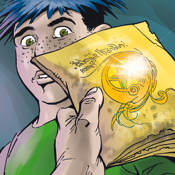 —"My name is Ernesto. I’m 17 and I study witchcraft. I know that is not something normal. It’s not the kind of career a college is prepared to offer courses in. 'Master in Witchcraft—the career of the future.' No. The papers aren’t full of announcements like that…"

Enter the dark, metaphysically quirky world of writer/artist Roberto Goiriz as he traces teenager Ernesto’s foray into the world of witchcraft. A world he thinks he controls, until he meets the Master Wizard—who gives him The Damn Comic. After that, Ernesto’s world will never be the same as he descends into a world of his own making.

A world of hell…

"The Damn Book" is stylish, disturbing, eerie fun in the manner of "Creep Show". Roberto Goiriz delivers his usual visual punch. I thought it was a scream. -- Johnny Atomic- Art Director, League Entertainment

About the author/artist: Roberto Goiriz was born in Asunción, Paraguay in 1961. He is a prolific award-winning artist, creator, editor and publisher of comics and comic strips. He works with comic book and graphic novel publishers in Spain, Italy and the U.S.—including Arrow Publications, LLC. He helped found the Graphic Design Career Program at the Catholic University of Asunción, where he is also a professor.

This app is distributed by Arrow Publications, LLC and powered by A2Digital.net.