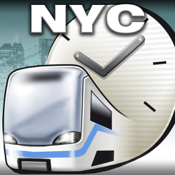 ONE App to show departure information and travel advisories for almost all public transportation systems in the greater New York City area. With this App you will have a mobile annunciator panel in your hand and you will never miss a transport again.
With InTime NYC you have access to 13 different providers in one single App!

This App immediately shows departure information and travel advisories of your favorite stops.
Never again waste your time waiting for the transport!
Never run for it when you are too late anyway.
InTime NYC shows how much time you have until the next departures just right away. Start InTime NYC and you know when your train is scheduled to depart. And if real-time data are provided, you can see immediately if there are any delays and on a map you can even see the exact location of the transports approaching your stop.

So being 'InTime' becomes much easier now!

Here is a summary of the key features of InTime NYC:
• Displays scheduled departure times of your favorite stops of the greater NYC area.
• Includes schedule data for more than 1.150 stops.
• Displays real-time data and bus locations of several transit authorities, e.g. MTA New York City Transit Bus.
• Displays travel alerts and advisories from several transit authorities.
• In total you have access to 11 different providers in one single App!
• Displays detailed trip information including arrival times and change
opportunities for all remaining stops.
• Supports setting date and time to see when trains will depart in the future.
• Customize your App by selecting one of the nine color schemas.
• Supports accessibility including Voice Over, e.g. reading out
departure times and destination names.
• Supports the following languages: English, Spanish, Italian, French and German.

Notes:
- All information are based on schedule data or real-time data provided by
the transit authorities (MTA, MTA New York City Transit Bus, NJ Transit,
Norwalk Transit, Rutgers Newark Shuttle, Rutgers University,
Roosevelt Island Operating Corporation).
- Schedule data are NOT real-time data. Therefore, the provided data are for guidance only!
- Although this App also shows information based on real-time data,
the provided data are for guidance only!
- InTime NYC will be updated on a regular basis to reflect schedule changes.
- Selecting stations on a map and displaying real-time data
requires an internet connection.
- InTime NYC has been designed and implemented by two former software architects of the NYC Subway countdown clocks.