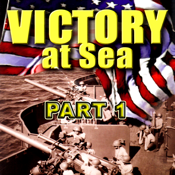 I-Mobilize is happy to present the first set of episodes from the Emmy award winning television documentary series Victory at Sea. This series documented naval warfare during World War II. It was originally broadcast in the USA during 1952-1953. The broadcasts consisted of 26 half-hour segments airing between October 1952 and May 1953. It is one of the first historic documentaries to become a viable television genre.


Look for the additional episodes coming soon in more Victory At Sea Apps from I-Mobilize.

As an added feature we have included an in App notebook for you to make notes about anything you may have found of interest while viewing the episodes.

You can also view silhouettes of various vessels of both the Allied forces and those of the Axis as well.