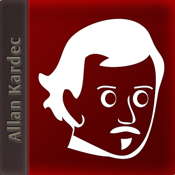 "O Evangelho Segundo o Espiritísmo" is a book from Alan Kardec (in Portuguese).